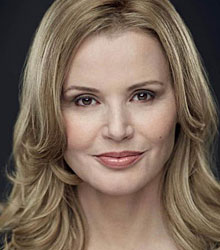 Academy Award-winner Geena Davis is one of Hollywood's most respected actors, appearing in several roles that became cultural landmarks. Earning the 2006 Golden Globe Award for Best Performance by an Actress in a Television Series – Drama, Geena broke ground in her portrayal of the first female President of the United States in “Commander in Chief”.

In 1989, she received the Academy Award for Best Supporting Actress for her role in “The Accidental Tourist”. She was again nominated for an Academy Award and Golden Globe for her performance as Thelma in Ridley Scott's “Thelma and Louise”, in which she co-starred with Susan Sarandon.

Geena Davis went on to receive a Golden Globe nomination for Best Actress for her portrayal of baseball phenomenon Dottie Hinson in “A League of Their Own”. She made her feature film debut starring opposite Dustin Hoffman in “Tootsie” and went on to star in such films as “The Fly”, “Beetlejuice”, “Earth Girls are Easy”, “Angie”, “The Long Kiss Goodnight” and “Stuart Little”.

Few have achieved such remarkable success in as many different fields as Geena Davis: not only is she an Oscar-winning actor, but also a world-class athlete (at one time the USA's 13th-ranked archer and women's Olympics archery team semi-finalist), a member of the genius society Mensa, and is becoming increasingly recognised for her tireless advocacy of women and girls rights nearly as much as for her acting accomplishments.

She is the founder of the non-profit Geena Davis Institute on Gender in Media. The Institute is at the forefront of changing female portrayals and gender stereotypes in children's media and entertainment. The Institute is uniquely positioned to spotlight gender inequalities at every media and entertainment company through cutting-edge research, education, training, strategic guidance and advocacy programs. Its mission is to work within the entertainment industry to dramatically alter how girls and women are reflected in the media.

She was awarded an honorary Oscar in 2019 for her efforts to promote a more balanced representation of women on screen.

In 2011, Geena Davis became one of a handful of celebrities attached to USAID and Ad Council's FWD campaign, an awareness initiative tied to that year's East Africa drought. She joined Uma Thurman, Chanel Iman and Josh Hartnett in TV and internet ads to "forward the facts" about the crisis.

Geena is also an appointee to the California Commission on the Status of Women, and is a partner with UN Women in the effort to change the way media represents women and girls worldwide.

She is currently the Special Envoy for Women and Girls in the field of technology for the United Nations. She holds honorary degrees from Boston University, Bates College and New England College.

Thelma & Louise, 20 Years Later
Thelma & Louise is a cultural landmark that remains a touchstone for women around the globe. The movie struck a nerve and women of all ages feel a passionate attachment to it. From the lectern, hear Geena Davis celebrate sisterhood, discuss what the movie meant to us then and what it means to us now — as well as speak to why and how being cast in the movie changed Geena’s life — and spurred her into creating a women’s empowerment non-profit and becoming a lifelong advocate for women.

Geena Takes Aim: Empowering our Daughters and Ourselves
Quickly becoming recognized for her tireless advocacy of women and girls nearly as much as for her acting accomplishments, Geena Davis has made it a life long mission to bring gender equality into the popular culture lexicon. At the forefront of changing female portrayals and gender stereotypes, through cutting-edge research, education, training, strategic guidance and advocacy programs, Geena Davis’ mission is to work within the entertainment industry to dramatically alter how girls and women are reflected in media.

A Conversation with Geena Davis

Gender Equality in the Modern Media
From the lectern, hear Geena celebrate sisterhood, discuss what her movies meant to us then and what they mean to us now — as well as speak to why and how being cast in Thelma & Louis changed Geena's life — and spurred her into creating a women's empowerment non-profit and becoming a lifelong advocate for women.

Geena Davis was one of the best luncheon speakers the Dallas Women's Foundation has had in its 27-year history. Ms Davis engaged everyone in the room through her witty and wise commentary on her own journey, and through her passionate and deeply informed advocacy for gender equality and gender balance in media. The relevance of her message to our mission as a women's foundation was appreciated by everyone, and she inspired us all to make personal commitments to be catalysts for change.

Geena Davis delivered a memorable keynote speech for the 25th Anniversary of our YWCA Inspire Luncheon series, weaving in humour and data and connecting with everyone in the audience. Many guests have said Geena was their favourite keynote speaker yet!

So many women were enlightened by the information and could sense her passion to improve the future for females. She was able to connect with each individual on a personal level.

We so enjoyed having Geena Davis at our event! She was fabulous to work with of course and her speech was very well received by the audience here in Calgary. She speaks with intelligence and heart and commitment – a potent combination! People also commented how they enjoyed her sense of humour.

We had an amazing time with Geena. Her talk was brilliant, and she was the most generous and lovely guest. It was very special for many of our other speakers to meet her, and she was unfailingly gracious and warm.

Geena was great and did a wonderful job in her closing keynote speech. She was very easy to work with.

Standing ovation! She was very funny and witty, and truly an inspiration. Everyone loved her!

Geena was funny and smart... people just loved her. She was so down to earth and kind and personable and gracious. She was even better than we expected.

How to book Geena Davis for your event