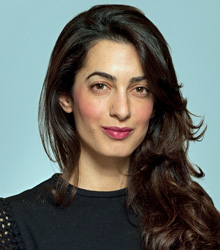 Alongside court work, she provides advice to governments and individuals on legal issues in her areas of expertise. From 2019-2020, she was the special envoy on media freedom by the British Foreign and Commonwealth Office.

Amal is ranked in the leading legal directories Chambers and Partners and Legal 500 as one of the top lawyers in the UK in the fields of international human rights and international criminal law.

She served as a senior advisor to Kofi Annan when he was the UN’s Envoy on Syria. She also served as Counsel to the UN Inquiry on the use of armed drones led by the Special Rapporteur on Counter-Terrorism and Human Rights.

Amal is a member of the UK’s team of experts on preventing sexual violence in conflict zones. And she was recently appointed to the UK Attorney General’s expert panel set up to advise and represent the UK government in cases involving public international law.

She has lectured students on international criminal law at the Law School of the School of Oriental and African Studies, University of London, The Hague Academy of International Law, the University of North Carolina (Chapel Hill), and at The New School in New York City.

Amal studied at St Hugh's College, Oxford University, where she graduated with a BA degree in Jurisprudence. She also studied for the LLM degree at New York University School of Law, which helped launch her career as a lawyer and activist.

During her time at NYU, she worked for Sonia Sotomayor and at the US Court of Appeals. Upon passing the New York bar exam in 2002, Clooney worked at a law firm in New York City. After three years, she decided to put all her focus into international law and relocated to work at The Hague, in the Office of the Prosecutor at the UN Special Tribunal for Lebanon and at the International Criminal Tribunal for the former Yugoslavia.

Following this, Amal returned to London and in 2010 passed her bar exam to become a barrister in England & Wales (Inner Temple). She was later appointed to the United Nations commission several times during 2013, and was involved in many other high-profile cases including representing Cambodia, the former Libyan Intelligence Chief.

Amal also worked to fight for women's rights in war zones, contributing to the Global Summit to End Sexual Violence in Conflict Initiative.

Despite her already high-profile career, Amal gained further media attention in 2014, with her high profile marriage to Hollywood actor George Clooney. She has received numerous awards for not only her work as a lawyer, but her impeccable sense of style as well.

In 2018, the Clooneys donated $500,000 to the March for Our Lives Campaign after the tragic Marjory Stoneman Douglas High School shooting, which pushed other influencers to donate as well.

Her first book,The Right to a FairTrialin International Law,co-authored with Dr Philippa Webb, was published in 2020 by Oxford University Press.

As a highly sought-after keynote speaker at conferences and seminars around the world, international law and human rights lawyer, Amal Clooney, offers organisations a global perspective on how to empower company leaders to foster greater humanity in the workplace.

From her years of international work, she has no shortage of personal stories of giving a voice to neglected and exploited groups. She continues to work toward this life mission each and every day and is passionate about raising human rights awareness.

Amal has spoken extensively about following her passions, which has led her to a successful and impactful career, and incorporating humanity in her everyday work. Her impressive career has been built on a foundation of giving a voice to those who don’t have one.

She is the president of the Clooney Foundation for Justice, which she co-founded in 2016 with her husband, actor George Clooney, to advance justice in courtrooms, communities, and classrooms around the world.

Thank-you again for your contribution to the first-ever CPA Virtual Congress 2020. We set out to do something very innovative, very transformative, and ultimately something hugely democratising, in the best interests of all our members. Thank you for accepting to speak and for delivering exceptional content that is of great value to our members and all congress participants.

Clients often ask about purchasing books for giveaways and delegate packs. Below you’ll find a selection of products by Amal Clooney. Click the images to view on Amazon's website. For bulk orders, please speak with your Booking Agent.

How to book Amal Clooney for your event