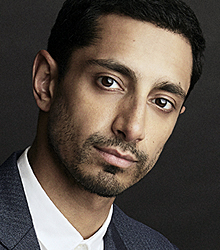 British-born Riz Ahmed is an Emmy-winning actor, musician and activist; he has also been nominated for a Golden Globe, Screen Actors Guild Award and three British Independent Film Awards.

Riz has been quietly pursuing every passion and opportunity for many years as an actor, and his meteoric rise to fame has made him an inspiration to a whole generation including BAME (Black, Asian, Minority, Ethnics).

In 2017, Riz was included on the front cover of the annual Time 100 list of the most influential people in the world. And as of 2018, films that he has been involved in have collectively grossed $2.4 billion at the worldwide box office.

As a musician, Riz is one half of the critically acclaimed rap duo, Swet Shop Boys, with the hip-hop albums Microscope and Cashmere, and earned commercial success featuring in the Billboard 200 chart topping Hamilton Mixtape, with their song "Immigrants (We Get The Job Done)" winning an MTV Video Music Award.

As an activist, Riz Ahmed has spoken candidly about Islamophobia, both in a personal and societal context, and garnered viral attention for his essay in ‘The Good Immigrant’ and speech on fair representation at the House of Commons. He has also been involved in raising funds for Syrian refugee children.

Born in Wembley, north London, to a British Pakistani working class family in 1982, Riz Ahmed graduated from Christ Church, Oxford University, with a degree in PPE (Philosophy, Politics and Economics), and later studied acting at the Central School of Speech and Drama.

Riz experienced a culture shock at Oxford, almost dropping out of university due to the isolating atmosphere. However, instead, he organised parties to celebrate cultures which did not conform to the dominant ‘elitist, white’ and ‘black-tie’ culture of Oxford.

His parents had moved to England from Pakistan during the 1970s, and he is a descendant of Sir Shah Muhammad Sulaiman, the first Muslim to become the Chief Justice of the Allahabad High Court during the colonial era.

Riz Ahmed’s film career began in the Michael Winterbottom film ‘The Road to Guantanamo’ and continued with ‘Shifty’, ‘Four Lions’, ‘Trishna’ and ‘Ill Manors’, before his 2014 breakout role in ‘Nightcrawler’ starring alongside Jake Gyllenhaal. In 2016, he starred in ‘Rogue One’, the first film in the new Star Wars anthology films as Bodhi Rook, a defected imperial pilot.

In 2017, Riz Ahmed became the first actor of Asian and Muslim descent to take home the EMMY for Lead Actor in a Limited Series, for his role as Nasir Khan in the HBO drama ‘The Night Of’.

More recently, Riz released his latest album The Longest Goodbye on his own record label Mongrel Records; the album includes nine tracks about him being “dumped by a post-Brexit Britain”, and was accompanied by a short film of the same title.

In 2021, Riz Ahmed was nominated and won in the best debut screenwriter category for the film Mogul Mowgli at the delayed British Independent Film Awards 2020. Starring in the lead role as a British-Pakistani rapper, The Guardian newspaper praised his "blistering performance" on screen.

Riz Ahmed is sought-after to speak everywhere from the House of Commons, where he was an invited guest to speak on diversity, to the BBC, where he’s spoken on harmful stereotypes and representation and a wide-range of groups and corporations around the world.

Riz was great! He’s so smart and thoughtful. He was the favourite session of the day.

How to book Riz Ahmed for your event