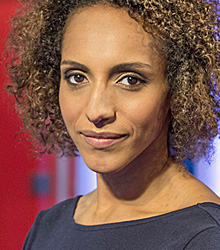 She was raised in Wimbledon, a testing ground for her observations about the divisions in modern Britain; London is one of the most diverse cities in the world, yet the privileged, hillside enclave, where Afua grew up was almost exclusively white.

From a young age, she had to make sense of the ways in which people racialised her — a mixed-race, black girl with an African name and a middle class upbringing — while at the same time claiming that they “did not see race”. Afua had to work out for herself the history of where those ideas originated, and why that history has shaped our world in so many profound ways, addressing it rarely and in the most selective ways.

Afua Hirsch left school in 1999 and studied philosophy, politics and economics at St Peter’s College, University of Oxford. There she focused on African politics and wrote a thesis on how the traditional role of women in Ghanaian society had shaped postcolonial contemporary national politics.

There, she practiced human rights law in criminal defence, public and international law before realising that, ultimately, what she really wanted, was to communicate the importance of these struggles to a wider audience. And so she turned her focus to journalism.

In 2008, Afua Hirsch became the legal affairs correspondent for the Guardian Newspaper. Then in 2011, she moved to Ghana as the Guardian’s West Africa correspondent, covering a large part of West and Central Africa for the newspaper.

Having moved back to the UK several years later, Afua began making TV in earnest in 2014 when she joined Sky News as the Social Affairs editor, a position she held until 2017. She reported on stories ranging from the return of slums in the UK’s deteriorating private rental sector, to the girl born into and trapped in a cult until her 30’s.

She is currently a regular contributor to Sky News debate show The Pledge, and participates in other current affairs programmes including C4 News, BBC2 Newsnight, BBC1 Question Time, and CNN. Afua also writes feature length articles for publications ranging from Time Magazine, Vogue, the Sunday Times and the Observer.

Afua Hirsch is a Booker Prize judge, the world’s leading literary prize for works of fiction in the English language. She is also one half of the fashion brand Sika, which creates ethically-made, African inspired men's and women's wear clothing, made in Ghana, sold globally.

Her first published book, released in 2018, Brit(ish): On Race, Identity And Belonging was awarded a Royal Society of Literature Jerwood Prize for Non-Fiction and is an Amazon best-seller.

In October 2020, Afua co-presented Enslaved: The Lost History of the Transatlantic Slave Trade alongside Hollywood movie icon and human rights activist Samuel L Jackson. Enslaved is a critically acclaimed and groundbreaking six-part documentary about the transatlantic slave trade, which aired on BBC2 and shone a light on 400-years of human trafficking and the millions of Africans who were shipped to the Americas.

As a journalist and former barrister, Afua Hirsch couldn’t be more comfortable than when she is speaking on topics that she is both knowledgeable and passionate.

She frequently gives keynote speeches around the world on current affairs, the media, the importance of diversity and inclusion, social justice, identity and unconscious bias.

Afua is also highly in-demand for facilitating conferences, seminars and plenary sessions; having hosted or spoken at events for Google, YouTube, London Stock Exchange, Facebook, the British Library, LSE, the University of Oxford and The FA.

So why do people keep asking where you are from?

Using her best-selling book as a presentation framework, Afua Hirsch explores a very British crisis of identity. Delving behind words like 'prejudice', 'disadvantage' and 'structural-racism', she unpacks the real world impact of these forces and on the lives of real people.

We are convinced that fairness is one of our values, but that immigration is one of our problems. How and why did this come to be? And how can we instigate change?

Afua Hirsch delivered a dynamic keynote speech as part of our Black History Month celebrations this year. Her expert command of communications allowed for a topic as complex as Unconscious Bias to be transmitted smoothly to a varied audience. Afua provided our audience members with useful takeaways and practical ways of overcoming issues related to Unconscious Bias. Afua has paved the way for a worthwhile discussion to be had, which has already led to much dialogue on the topic throughout the firm and has even given decision-makers the impetus to approach their work in unique ways. We cannot recommend Afua Hirsch enough, as she is an excellent speaker who provided an engaging, interesting, humorous and thought-provoking talk.

We just wanted to pass on our sincerest thanks to Afua for speaking at our event earlier. She was absolutely fantastic and we have been inundated with feedback about how insightful and thought provoking people found her talk and her responses to the many questions. We really enjoyed listening to her speak. Thank you so much for your help too in arranging for Afua to come along and speak to us. You really made this easy to organise.

We have had amazing feedback from all of our attendees and have taken some notes and we will be sharing your advice and best practices and implementing them both individually and as a collective at Qualtrics to strengthen our understanding and learning of diversity and inclusion.

I wanted to personally thank both you and Afua for the session she took yesterday with the Qualtrics European team. The feedback we have received from both the European and US teams have been very positive and encouraging. Thank you once again for the time spent with Qualtrics, and I would like to encourage you to continue speaking out, and being a role model to those around you.

Clients often ask about purchasing books for giveaways and delegate packs. Below you’ll find a selection of products by Afua Hirsch. Click the images to view on Amazon's website. For bulk orders, please speak with your Booking Agent.

How to book Afua Hirsch for your event