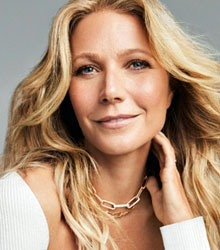 The daughter of a Hollywood director and an actress, Gwyneth was raised both in California and New York. Although she started studying Art History at the University of California, she dropped out to pursue acting full-time. Gwyneth started dabbling in professional acting at a very early age, with minor roles in both Shout (starring John Travolta) and Hook (starring Robin Williams), both in 1991. Her supporting role in Se7en four years later introduced her to future fiancé Brad Pitt.

From there on, Paltrow’s acting career blossomed, with critically acclaimed performances in Emma, Shakespeare in Love and Bounce, which also starred Ben Affleck, her then-boyfriend. Three weeks after the untimely passing of her father, Gwyneth met her future husband Chris Martin at a Coldplay gig. They married a little over a year later and stayed together for 10 years before ‘conscious uncoupling’ and finalising their divorce in 2016.

In 2011, she won an Emmy® for Guest Actress in a Comedy series for playing substitute teacher Holly Holiday on Glee, and her song, Coming Home, from the soundtrack for Country Strong, was nominated for an Oscar® (the album went gold). In addition, Paltrow has authored three New York Times Best Selling cookbooks, My Father's Daughter (2011), It's All Good (2013), and Its All Easy (2016)—the latter two hit #1. Her newest cookbook, The Clean Plate, was released in January 2018.

In 2008, Gwyneth founded Goop, a lifestyle brand devoted to making every choice count, where food, shopping, and mindfulness collide. In particular, goop has gained acclaim for its focus on health, wellness, and clean eating, as well as its city guides, an insider’s perspective on the very best places to eat, shop, and stay in the world’s most compelling destinations.

In fall 2018, on its 10 year anniversary, Goop expanded internationally to the EU. Goop’s ventures include Goop Magazine; Goop book imprint; goop Lab, permanent stores located in Los Angeles, CA and NY and the In Goop Health summit. In addition, Goop a tightly edited digital shop, a book imprint and its own product lines, including skincare, fragrances, apparel, bath soaks, and supplements.

Goop also strives to fulfill a mission of helping women reach their full potential and gaining autonomy over their own health. After serving as Goop’s Chief Creative Officer since its inception, Gwyneth Paltrow assumed the CEO mantle in 2016, leading the company’s primarily female team of more than 240 to exponential growth.

Paltrow also helped facilitate the #metoo movement, as she has always been comfortable pushing important conversations into the mainstream.

Gwyneth has been the face of Estee Lauder’s Pleasures perfume since 2005 and is also the face of American fashion brand Coach. She is a Save the Children artist ambassador, raising awareness about World Pneumonia Day.

She is on the board of the Robin Hood Foundation, a charitable organisation that works to alleviate poverty in New York City.

Academy Award-winning actress, author of three New York Times bestselling cookbooks, founder and Chief Creative Officer of the lifestyle company Goop, Gwyneth Paltrow has pushed many conversations into the mainstream — primarily around health, wellness, and mindfulness — shining the light on our basic right to have clean and healthy food, properly regulated personal care products, and access to information so we can make our own choices for our families.

As the leader of a primarily female start-up, she is also heads-down on creating a culture that both celebrates and empowers women, where the thread line is that we are all multifaceted, complicated, and busy b**tches who can care about family and work simultaneously. While the goop team is just a microcosm, it's emblematic of a larger sea change that needs to happen.

Gwyneth Paltrow is available for exclusive speaking engagements and personal appearances. In a candid and honest fireside chat setting, she discusses her journey from actor to entrepreneur, the lessons she has learned from building her business, and her views on the future of the wellness industry.

Commenting on transitioning from actor to entrepreneur, Gwyneth says “To be an entrepreneur and have control over your own destiny is obviously a great thing, but, for me, what I love most about it is I love working with amazing, brilliant, mostly, women, and I love innovating. I love pushing boundaries and trying to do something new. It’s very exhilarating.”

And on the future of wellness, “I think it’s really for me just about maintaining the connection between my instinct and executing on it in a smart way, obviously. And, obviously, along the way, we’ve made mistakes.… But I like being brave, and I like getting in trouble. I mean, it’s important. I think somebody has to do it, and I think at Goop, we really believe in trying to move the needle and trying to push culture forward as it pertains to, you know, people having autonomy over the way they feel.”

Clients often ask about purchasing books for giveaways and delegate packs. Below you’ll find a selection of products by Gwyneth Paltrow. Click the images to view on Amazon's website. For bulk orders, please speak with your Booking Agent.

How to book Gwyneth Paltrow for your event