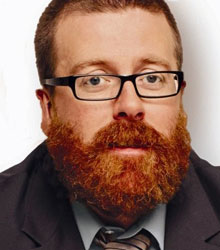 As a recognised face on every episode of BBC2's Mock the Week, in addition to his appearances on 8 out of 10 Cats, They Think It's All Over, The Live Floor Show, FAQ U, The Graham Norton Show and Live at the Apollo, Frankie Boyle is an established name in the world of comedy.

Frankie leapt onto the circuit in style when he won the Daily Telegraph's Open Mic competition in 1996, before becoming a regular and popular compere at high-profile clubs across the UK.

While Frankie's stand-up career reached new heights, his television work took off. After regular appearances on BBC Scotland's Live Floor Show (for which Frankie was also a writer), Frankie has appeared as a guest on 8 out of 10 Cats, They Think It's All Over, FAQ U and Mock The Week, for which he is best-known.

Alongside his work in front of the camera, Frankie is also a highly-regarded writer. He has written for several series including 8 out of 10 Cats, the UK version of Live Floor Show; 2DTV and 29 Minutes of Fame.

Through the facets of Frankie's career, his live performances stand strong. He recently enjoyed a sell-out run at the 2007 Edinburgh Fringe Festival with his cutting-edge solo show, 'Morons I Can Heal You' which sold out its 13,000 tickets before the festival had begun.

Clients often ask about purchasing books for giveaways and delegate packs. Below you’ll find a selection of products by Frankie Boyle. Click the images to view on Amazon's website. For bulk orders, please speak with your Booking Agent.

How to book Frankie Boyle for your event