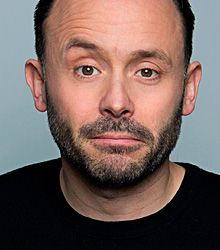 Geoff Norcott’s comedy career has been snowballing since his hugely successful debut Edinburgh appearance in 2016 with ‘Conswervative’. The show subsequently went on a national tour and was quickly followed with ‘Traditionalism’ in 2018.

Geoff has also made a flurry of TV appearances, including several outings on Question Time, Edinburgh Nights, Live at The Apollo, Comedy Bigmouths and a regular correspondent role on The Mash Report.

As a comedian who leans politically to the right, his 2016 Edinburgh show, Conswervative, focused on his rarity as a pro-Brexit Conservative voter on the British comedy circuit. Consequently, Geoff has also found himself in demand as a social commentator on shows like Daily Politics (BBC1), All Out Politics (Sky News) and Victoria Derbyshire (BBC2).

In this capacity he’s also been popping up on radio, discussing comedy and politics on Loose Ends (R4), Today (R4) and Good Week, Bad Week (5Live). His satirical comment has also found it’s way into national publications with articles appearing in The Sunday Telegraph, Independent and The New Statesman.

The son of an active trade unionist, Geoff Norcott was raised in South London and, following his parents divorce when he was nine, his mother moved him and his sister to a council estate in Wimbledon. He attended Rutlish School in Merton, the same school attended by Conservative Prime Minister John Major. Geoff earned an English degree from Goldsmiths, University of London, and prior to becoming a comedian worked as an English teacher.

Geoff remains in constant demand as a writer, with an impressive list of TV credits, including: Live at Apollo (BBC1), Have I Got News For You (BBC1), Channel 4’s Alternative Election (C4), 8 out of 10 Cats (C4), The Sarah Millican Television Programme (BBC2), A League of their Own (Sky1), Xmas Live at the Apollo (BBC2), Katherine Ryan in Ireland (Sky Arts), 8 out of 10 Cats Does Countdown (C4).

Geoff has also been amongst the awards with a nomination for Best New Show at the Leicester Comedy Festival and an Operational Services Medal for five frontline tours entertaining the troops in Afghanistan.

Geoff Norcott has extensive experience performing at corporate, private and unique bookings; from Google’s UK head office to Camp Bastion in Afghanistan. His accessible material and ability to work with information supplied make him a high point to any corporate event.

Geoff went into a large room and had the whole of it laughing within no time. He picked out the right personalities and gave our event the talking point we were looking for.

Geoff absolutely stormed it. A winning mix of tailored material and hilarious ad libbing. We’d have him back again and again.

A great success for Carlsberg...Geoff Norcott was excellent...it cannot be easy performing to wide group of ages put he pulled it off and the feedback from the customers was very positive.

Just a quick email to say how fantastic Geoff was on Wednesday! His set was brilliant, he really got a feel for the crowd and everyone loved him.

Just wanted to let you know that we think that Geoff Norcott is fantastic...the crowd absolutely loved him.

Geoff’s performances at the event at Sandown Park were perfect! His approach at the briefing stage was spot on and so consequently were the performances. Geoff was bang on with his content resulting in all 4 performances being brilliantly received by the audience and leaving a delighted client.

Geoff was excellent, very funny and great entertainment. With a mixed audience he was able to encapsulate the mood and showed a good understanding of people and their obvious personality traits.

Clients often ask about purchasing books for giveaways and delegate packs. Below you’ll find a selection of products by Geoff Norcott. Click the images to view on Amazon's website. For bulk orders, please speak with your Booking Agent.

How to book Geoff Norcott for your event