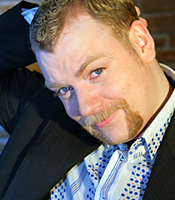 Rufus Hound has come a long way since his days explaining plasma to school kids at the Science Museum. He is a comedian, presenter, actor and the owner of a fine moustache.

He won that dance thing for Sport Relief dressed up as Cheryl Cole. Remember? And was on ‘Celebrity Juice' every week for almost four years, sat next to Fearne Cotton. Or as the eponymous hero of CBBC's ‘Hounded'.

So that's what Rufus does. Though there's other stuff as well. He hosts Radio 4's “My Teenage Diary”, took over from Anne Robinson to present the final series of ‘OutTake TV' for BBC1 and captained the Blue Team for three series of Dave's ‘Argumental'. Having picked the year 2000 as his funniest, Channel 4 gave him two hours one Saturday night to explain why in “My Funniest Year: 2000”, which was very nice of them.

As a stand-up comedian, Rufus was a finalist in Channel 4's coveted ‘So You Think You're Funny' competition at the Edinburgh Festival 2002, and supported Rory Bremner on his 2005 National Tour. He is a regular at The Comedy Café, Amused Moose, The Laughing Horse, The Glass House, The Brewhouse, Aha Ha Ha, Up The Creek, The Comedy Store and Komedia.

An accomplished writer, Rufus Hound has co-written the BBC3 sitcom The Flat, (which he also starred in!) and has also provided scripts for Top of the Pops and Glastonbury, together with pilot shows for Ch4 and BBC TV.

Oh, and Rufus has been a guest on a lot of things too. Jonathan Ross's radio show, Strictly Come Dancing: It Takes Two, The Apprentice: You're Fired, Xtra Factor, The Five o Clock Show, This Morning, etc.

Rufus Hound also does loads of stand-up across the country and hosts glittering awards ceremonies.

Clients often ask about purchasing books for giveaways and delegate packs. Below you’ll find a selection of products by Rufus Hound. Click the images to view on Amazon's website. For bulk orders, please speak with your Booking Agent.

How to book Rufus Hound for your event