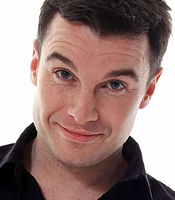 With over ten years working on the comedy circuit, Greg Burns is award winning comedian and comedy club favourite, known for his playful humour and infectious charm. Greg's confident performance and affable persona make him an immensely popular compere amongst corporate bookers and audiences alike. With hilarious and well constructed routines, he is the perfect comedian for your event as both a host and headline performer.

Greg hosted London's No.1 Drivetime show for Capital FM Radio, having previously hosted a Sunday afternoon show for Virgin Radio and a Drivetime show for Heart FM. He can be seen at the top comedy clubs across the world including Jongleurs, The Glee Club and The Comedy Store.

He has worked on such shows as Have I Got News For You and The Catherine Tate show, as well as appearing in The Office Christmas special in a part written specifically for him by Ricky Gervais. Other credits include hosting The Teenage Cancer Trust gigs at The Royal Albert Hall (including a notable stand up performance with Russell Brand), a special appearance in London's West End in the smash hit musical Priscilla Queen of The Desert in 2009 and hosting the Summertime Ball 2010 in front of a capacity crowd at Wembley Stadium, which involved introducing the likes of Cheryl Cole, Rihanna and Usher alongside Johnny Vaughn and Lisa Snowdon. Greg also hosted The Variety Club awards, alongside Justin Lee Collins, for Channel 5.

As loveable a comedian as you're likely to find. Confident, funny and clever.

Quick-witted and lively compere Greg Burns did a fantastic job sparring with a rowdy and vocal midweek crowd with a series of sharp comebacks and a fine routine packed with unexpected punchlines.

Many thanks for this year's hosting of the awards for us- you did a really great job. We would like to secure your services for next year as well...

Greg was excellent, a true professional who topped the evening off.

What a cracking night, thoroughly enjoyed by all of us... the entertainment was great

How to book Greg Burns for your event