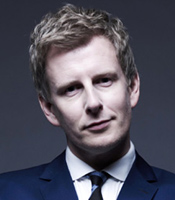 Patrick Kielty began as a stand up comedian whilst studying psychology at Queen's University Belfast and quickly made a name for himself as the host of Northern Ireland's first comedy club “The Empire Laughs Back”.

His fearless satirical routines, in which he regularly attacked both Republican and Loyalist paramilitaries drew praise from both critics and those on the streets of pre ceasefire Belfast, not least because he himself had lost his father to loyalist gunmen aged 16.

The BBC were quick to pick up on his ability to both provoke and charm in equal measure and his big break came in 1995 with Comic Relief's St Patrick's Day Stand Up Special along side established stars such as Ben Elton and Jo Brand. His first 2 stand up titles went triple platinum and an RTS award winning series “PK Tonight” for BBC Belfast quickly followed.

Channel 4's “Last Chance Lottery”, saw Patrick Kielty make the move to network television and he was soon a household name with shows such as “Fame Academy”. His chat show “Patrick Kielty Almost Live” hit the screens in 2002 and ran for 6 seasons on BBC1.

In 2006 he returned to stand up. A sell out UK tour and a best selling DVD “Patrick Kielty Live” confirmed him as one of Ireland's most successful comedy exports. His return to the top of the stand up tree was completed the following year headlining “Live at The Apollo” with Joan Rivers for BBC1.

A straight acting debut in “A Night in November” at Belfast's Opera House saw things come full circle – back on the stage of the theatre that launched his Comic Relief stand up debut, a dozen years earlier. It was a role that charmed both critics and audiences and a transfer to London's West end quickly followed in 2008.

The last 2 years has also saw Patrick return to CH4 hosting “Stand Up for the Week” and appearing regularly on their Comedy Roasts. The end of 2011 saw him back on stage, topping the bill on BBC1's Live at the Apollo.

Edgy but also hilarious and never losing control of the room

Patrick Kielty was an absolute delight to work with. He was extremely professional and very calm. We had a few issues with setting up which meant there Was a delay in rehearsing but he was happy to hang around and was very calm and patient. We doubled up the awards for this which meant he had to run across the stage for photos for all the awards and he managed this brilliantly. We would definitely be happy to use Patrick again!

Patrick Kielty was fantastic... Very engaged and clearly enjoyed his set – lots of laughter which set people up nicely for a good boogie afterwards!

Clients often ask about purchasing books for giveaways and delegate packs. Below you’ll find a selection of products by Patrick Kielty. Click the images to view on Amazon's website. For bulk orders, please speak with your Booking Agent.

How to book Patrick Kielty for your event