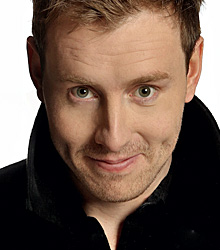 Irishman Andrew Ryan is one of the most exciting comedy talents in recent years. In-demand as an act and an MC at the biggest comedy clubs and corporate events across the UK & Ireland.

Andrew’s quintessentially Irish storytelling abilities and cheeky, friendly demeanour make him a natural stand up. He performed his debut hour show ‘Ryanopoly’ at the Edinburgh Fringe Festival in 2012, receiving rave reviews. In 2015 he was at the Edinburgh Festival with his latest show ‘Perfectly Inadequate’. Selling out his run at the Festival and having toput on extra shows.

Andrew returned again to Edinburgh in 2016 with he new show ‘Ruined’. In 2017, he took his show ‘Did you get here alright?’to Edinburgh and then toured it across the UK. In 2018 he won ‘BEST NEW SHOW’at The Leicester Comedy Festival with his ‘Is everything alright at home?’ show.

Andrew has appeared on many TV shows in the UK & Ireland. He has performed stand-up on BBC3’s Russell Howard’s Good News, Best of the Edinburgh Festival Live on BBC3, The Blame Game on BBC 1, Live at The Comedy Store for Comedy Central, Live for MIND on Comedy Central, The Six O Clock show on TV3 ( Ireland). Contributions to Golf’s Funniest Moments, Crickets Funniest Moments, When Chat Shows Go Wrong all for Sky 1.

Over the last couple of years Andrew Ryan has built a reputation as reliable awards host. He has hosted some big blue chip events across the UK & Ireland. Andrew has built up a strong client base, returning to host some events year after year.

Andrew Ryan tailored his set to our audience and kept them entertained. As well as being funny, Andrew did an excellent and professional job in hosting our awards. He did such a good job for us that we booked him the very next day for another event.

Andrew Ryan was brilliant interacting with the audience at our Property Management Awards, who loved his funny and talented performance. We would highly recommend Andrew as an awards host - he was really professional and a genuinely nice guy to work with.

How to book Andrew Ryan for your event