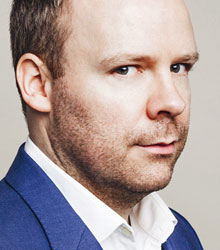 Award-winning Irish comedian, Neil Delamere, is one of the top acts working on the comedy scene today. He is also one of the most in-demand comedians on Irish television and on-track to repeat his success here in the UK.

Relocating to London from his native homeland, Neil has presented Just For Laughs, Eureka! The Big Bang Query and Republic of Telly. He is best known to UK audiences for a storming appearance on the first series of Michael McIntyre's Comedy Roadshow on BBC One.

Neil has also appeared on The World Stands Up and Live At The Comedy Store, both on Comedy Central. He recently appeared on BBC Radio 4's The News Quiz and makes regular appearances on RTE's The Panel, Radio 5 Live's Fighting Talk, the BBC's The Blame Game.

Neil has also guest-presented some of the most popular radio shows in Ireland including: The Ray D'Arcy Show; The John Murray Show; The Mooney Show; and The Ian Dempsey Breakfast Show as well the popular RTE Radio 1 series, Second Republic.

He has performed all over Ireland as well as internationally at the prestigious Vicar Street in Dublin, Kilkenny Cat Laughs Festival, Montreal Just For Laughs Festival, Melbourne International Comedy Festival and the Edinburgh Fringe Festival. The latter of which has garnered rave reviews for Neil, including a coveted five stars from The Scotsman, the premier broadsheet reviewer at the event.

His DVDs No Message (2007), Crème Delamere (2009) have achieved platinum status. His recent RTÉ documentaries, which he wrote and presented, called Holding Out for A Hero garnered an Irish Film and Television Award and a Celtic Media Award as well as international sales to the History Channel and SBS.

On the corporate entertainment circuit, Neil Delamere is highly sought-after for hosting corporate award dinners as much as he is in-demand for presenting after dinner comedy, and for a wide range of events and functions.

His razor-sharp wit, coupled with a natural ability to ad-lib and think quickly on his feet, makes London-based Neil ideally suited to entertain a diverse range of audiences. He has worked with all sectors of society and business from banking to insurance, pharmaceutical to retail and from sport to engineering.

Please pass on our thanks to Neil for his performance last night. It was the highlight of the evening and we have had so many positive comments from guests who clearly thoroughly enjoyed it. His prep and homework paid off handsomely, and by chance those he picked in the audience were perfect targets! He will be hard to follow!

Delamere is a banter bomb, primed to explode with laughter... simply put he is a master.

A master of stand-up.

Clients often ask about purchasing books for giveaways and delegate packs. Below you’ll find a selection of products by Neil Delamere. Click the images to view on Amazon's website. For bulk orders, please speak with your Booking Agent.

How to book Neil Delamere for your event