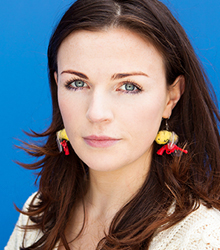 Aisling is an Irish actor, award winning stand-up, writer and solid guest at a dinner party. After graduating from trinity College in Dublin, she trained in classical acting at LAMDA and has over the years appeared in numerous TV shows and films.

In 2012, in what was a surprise to scientists everywhere, Aisling became the first woman to win the prestigious new stand-ups ‘So You Think You're Funny?' competition in 20 years. Then, just a year later, her debut solo, stand-up show at the Edinburgh Fringe, sold out in three days, received four and five star reviews across the board and she was nominated for the Foster's Best Newcomer Award (formerly The Perrier).

She was the first person to win So You Think You're Funny? and then go on to be nominated for Best Newcomer at Edinburgh within the same year since Peter Kay in 1998. Go team.

Aisling Bea has appeared as both an actor and stand-up on numerous TV shows including 8 Out of Ten Cats (Ch4), Vodka Diaries (BBC3), The Assets (ABC America), Channel Four's Comedy Gala, Qi, BBC's Live At The Apollo, Sky's Trollied as Charlie with Miriam Margoyles,Never Mind The Buzzcocks (BBC2) and Would I Lie To You? (BBC1).

How to book Aisling Bea for your event