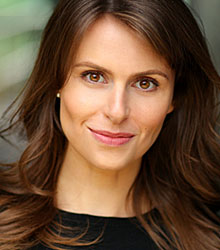 Ellie Taylor has been performing stand up since 2010. Having taken part in ITV's comedy talent contest Show Me The Funny, with no prior experience of stand up, she brought with her a breath of fresh air to the comedy circuit.

Ellie finished fourth in the competition, with Irish-Iranian comedian Patrick Monahan taking the the top spot. However, it earned the confident and utterly hilarious comedian a whole load of new and appreciative fans.

More recently, you’ll recognise Ellie Taylor as the presenter of BBC3's Snog, Marry, Avoid?, as co-presenter of The Mash Report alongside fellow comedians Nish Kumar and Rachel Parris, as team captain on ITV2's panel show Fake Reaction or from popping up on C4′s 8 Out of 10 Cats. Or, maybe, you've just seen her in Pret. She's in there a lot, especially on mushroom risotto day.

Other TV appearances include hosting Live at The Apollo, appearing on Mock The Week, Would I Lie To You QI, As yet Untitled, Drunk History, The John Bishop Show and BBC Radio 4’s The Now Show.

In 2014 Ellie took her first hour-long solo show ‘Elliementary’ to the Edinburgh Fringe Festival it proved so popular that she had to put on a run of extra weekend gigs to accommodate the demand.

She returned to the Edinburgh Fringe Festival in August 2017 for the full run with her newest show, ‘This Guy’, which she subsequently took on tour around the UK. In 2019 she toured the UK with her show ‘Don’t Got This’.

Ellie was one of five UK comedians to be featured in Netflix’s trailblazing Comedians of The World series, with her special Cravings premiering on New Year’s Day 2019.

Alongside this, she’s also part of the core cast of hit BBC 2 satirical show The Mash Report, with her clips becoming worldwide viral hits, notching up close to 60 million views online and being shared by Madonna.

Ellie Taylor has established herself as a trusted and reliable firm favourite on the corporate comedy circuit, whether it’s entertaining after dinner with a stand up comedy performance, or hosting a glitzy awards do.

Ellie has also performed stand up comedy for the likes of CIBSE, Inkling London and Nomura Bank.

How to book Ellie Taylor for your event