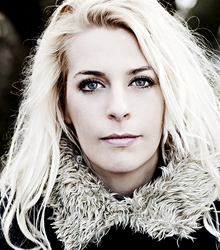 Sara Pascoe has been working as a comedy actor, sketch performer, improviser and writer since 2006, when she joined the Newsreue topical sketch show. She started stand-up comedy in late 2007 and the following year was a runner-up in the Funny Women competition and placed third in the So You Think You're Funny? new act competition.

In 2009, she landed a regular role in the Channel 4 sitcom Free Agents as the disrespectful assistant, Emma. She has also appeared in Campus, The Increasingly Poor Decisions of Todd Margaret, Twenty Twelve, The Thick of It and Being Human.

Her television appearances include QI, Stand Up for The Week, Live at the Comedy Store and Live at the Apollo. She encompasses a wide range of topics, from the post-postmodern celebrity of Big Brother's Chantelle Houghton to the philosophies of Nietzsche

Sara Pascoe is a vegan and performed at the Bristol edition of the vegan/vegetarian food festival Vegfest, which combines stand-up comedy and live music with various information regarding vegetarian and vegan lifestyles, having vendors selling only vegan-friendly goods.

How to book Sara Pascoe for your event