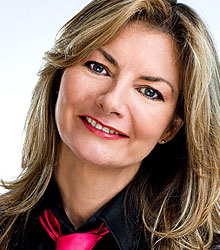 Jo Caulfield is "one of the finest female comics at work" (The Observer) and was nominated as "the best female Stand-Up in the country" by comedy website Chortle.

Jo has come a long way since her first open spot more than 15 years ago. To misquote the Human League, ‘Jo was working as a waitress in an Italian Restaurant when she found herself drunkenly entering the weekly open mike competition at The Comedy Café in East London’.

Although she hadn't prepared anything and could hardly stand, let alone speak, Jo won the competition and was asked back for a 10 minute booking the following week.

After being advised that regular compering was one of the best ways to improve as a comic Jo saved her 'waitressing tips', bought a cheap microphone and a small amplifier and opened her own comedy club in the basement bar of The White Horse in Hampstead.

It was getting up on stage at her own club every week for 5 years that gave Jo her ability for bantering with the audience and improvising on their comments. As one critic put it, "It's an amazing knack. Caulfield seamlessly weaves in and out of material and audience banter".

She is a regular guest on both Mock The Week and Have I Got News For You. Other TV appearances include Never Mind The Buzzcocks, Saturday Night Live, The Comedian's Comedian, Music Hall Meltdown, The Bigger Picture, Dawn French's Girls Who Do Comedy, The Stand Up Show and World Stand's Up.

Jo's quick wit has led to her being in demand as a guest on a huge variety of Radio shows including The News Quiz, Armando Iannucci's Charm Offensive, The Steve Wright Show, The Now Show, The Unbelievable Truth with David Mitchell, Clive Anderson's Chat Room, Quote Unquote, Radcliffe and Maconie, Woman's Hour, Does The Team Think and Parson's and Naylor's Pull Out Section.

Jo Caulfield was also Comedy Writer and Programme Consultant on all five series of the BAFTA Award-winning So Graham Norton. She was Head Writer on Zoe Ball's Strictly Dance Fever and Ruby Wax's Waiting Game.

How to book Jo Caulfield for your event