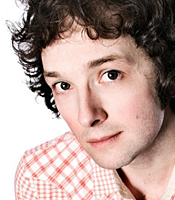 Chris Addison is a critically acclaimed stand up renowned for his versatility, his pacy, energetic routines and faultless delivery. Both his 2004 and 2005 solo Edinburgh shows sold out, and were nominated for the prestigious Perrier Award.

After starring in BBC Two's multi award winning comedy 'The Thick of It', for which he received a British Comedy Award nomination for Best Newcomer, Chris made his big screen debut in Academy Award nominated 'In the Loop', an exciting, fast paced political comedy that looks at what happens when the people in power realise their careers are on the line.

Increasingly well known on camera, Chris's talent also extends behind the scenes, as he is an established writer who has written and starred in his own sitcom, Lab Rats, for BBC Two, and has written two books: Cautionary Tales for Grown-Ups and It Wasn't Me. His further television writing credits include: Harry Hill's TV Burp (ITV1) and TFI Friday (Channel 4).

Chris has also enjoyed critical acclaim as one third of comedy show The Department (BBC Radio 4) and for his radio show The Ape That Got Lucky (BBC Radio 4), which won a Sony Radio Academy Award in 2006. Chris has also appeared on Live at the Apollo, Friday Night with Jonathan Ross and regularly on QI and Mock the Week. He has also appeared frequently as a panelist and as the host of Have I Got News For You.

2011 saw Chris host an episode of Dave's One Night Stand and author an episode of My Funniest Year for Channel 4. Later that year he recorded his series Show and Tell for E4 and reprised his role as a regular member of the Mock the Week panel.

It was the best event we have done sofar and Chris Addison was certainly thebest entertainer we have ever had (andwe've had a few now) by a million miles. Thank you very much.

Great evening, thank you! Everyone hada great time. Thanks so much to Chris Addison...

Chris Addison is a gifted comic a terrifictechnician whom you would trust to winover pretty much any room.

[Chris Addison] was brilliant - they loved him, great feedback from the audience and the Chairman is very happy. Please pass my personal thanks to Chris – and my thanks to you too for this one.

[Chris Addison and Joe Wilkinson were] brilliant! They were fantastic and very professional. The client was really pleased and appreciated the efforts from both.

Clients often ask about purchasing books for giveaways and delegate packs. Below you’ll find a selection of products by Chris Addison. Click the images to view on Amazon's website. For bulk orders, please speak with your Booking Agent.

How to book Chris Addison for your event