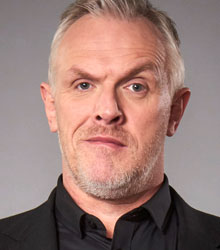 He is best known for starring in his own critically lauded sitcom Man Down (Channel 4) and playing the infamously psychotic Head of Sixth Form 'Mr Gilbert' in The Inbetweeners (Channel 4) together with its two spin off feature films.

Greg has also appeared in Cuckoo (BBC Three), which earned him a BAFTA nomination for Best Male Performance in a Comedy Programme and made a guest star appearance as King Hydroflax in the 2015 Doctor Who Christmas Special (BBC One), and voiced 'Balloon Man' in the feature film Teen Titans Go! To The Movies (Warner Bros).

One of the UK's most popular stand up comedians, Greg Davies stands head and shoulders over his peers, literally, he's 6' 8" tall. His hotly anticipated debut solo show was a critically lauded sell-out smash hit at the 2010 Edinburgh festival, picking up a prestigious nomination for the Fosters Comedy Award (formerly the Perrier). Greg subsequently embarked on a full national tour of the show taking him to some of the best venues in the UK.

He hosted the 2018 Royal Variety Performance Gala (ITV) in front of HRH the Duke and Duchess of Sussex at the London Palladium, and presented the documentary Greg Davies: Looking for Kes (BBC Four) based on Barry Hines' novel Kestrel for a Knave.

On stage, Greg performed as one third of the sketch trio We Are Klang who were nominated for the Edinburgh Comedy Award in 2006. As a solo act, Greg's debut stand-up show Firing Cheeseballs at a Dog was nominated for the Edinburgh Comedy Award in 2010, and his third show You Magnificent Beast was recorded at London's Hammersmith Apollo and released as a Netflix Special to rave reviews in Spring 2018.

Greg has made regular appearances on numerous TV Shows including: Would I Lie to You? (BBC One), 'The Graham Norton Show' (BBC One), '8 Out Of 10 Cats' (Channel 4), 'Mock The Week' (BBC Two), 'Never Mind The Buzzcocks' (BBC Two), 'The World Stands Up', 'Edinburgh and Beyond', 'The Comedy Store' (all Comedy Central) and as team captain on 'Ask Rhod Gilbert' (BBC One).

Greg Davies was really fantastic. His comedy was great and pitched at just the right level (not too rude / not too tame) for the crowd. He also got a good balance of being a bit cheeky to our suppliers but making sure they all left loving him. Our guests definitely thought he was a success! Please pass on our thanks to Greg.

Thanks again for everything last week. Please let Matt (Forde) and Greg Davies know that that we have continued to get massively positive feedback about their sets - both were a huge hit.

I have worked on over 200 awards dinners over the years and I can honestly say that Greg Davies' hosting skills and performances rate in my top ten of all time.

Please thank Greg Davies & Ed (Gamble), they were both brilliant. Ed really worked the stage and hosted so well and Greg Davies had the audience in stitches for his set. My own Director was telling me today how hard he laughed! Thank you again for making it such a smooth booking and look forward to working with you again on something else in the future.

Greg Davies was really fantastic. His comedy was great and pitched at just the right level (not too rude / not too tame) for the crowd. He also got a good balance of being a bit cheeky to our suppliers but making sure they all left loving him. Our guests definitely thought he was a success!

Clients often ask about purchasing books for giveaways and delegate packs. Below you’ll find a selection of products by Greg Davies. Click the images to view on Amazon's website. For bulk orders, please speak with your Booking Agent.

How to book Greg Davies for your event