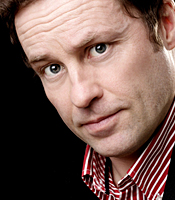 Ardal O'Hanlon is the star of hit comedy programmes Death in Paradise, Father Ted and My Hero. He began his show business career while at Dublin University where he and his friends would hire themselves out as wacky after-dinner speakers.

After this he got together with two fellow university students, Barry Murphy and Kevin Gildea to form the comedy troupe, Mr Trellis. They established The Comedy Cellar, Ireland's first alternative comedy club in the upstairs room of The International Bar, Dublin.

In 1994 Ardal and Kevin went to London to enter The Comedy Newcomer Of The Year competition at The Hackney Empire which Ardal won. It was while performing his stand-up routines in London that Ardal was spotted by Graham Lineham, who was casting for a new Channel 4 sitcom entitled "Father Ted". Ardal won the role of the innocent but extremely daft, Father Dougal McGuire and his career has been on an upwards trajectory ever since.

As well as Father Ted, Ardal starred in the TV series My Hero, Big Bad World and most recently the BBC’s comedy crime drama Death in Paradise. He has hosted a series of The Stand Up Show on BBC1 and made guest appearances in shows such as "Whose Line Is It Anyway?", "Shooting Stars" and recently he hosted "The 100 Greatest TV Characters" on Channel 4.

Ardal also travelled to Hollywood to make a short film entitled Another Bobby O'Hara Story in the title role as a gangster. He then voiced the reindeer in the Comic Relief Christmas Day animation special Robbie The Reindeer- Hooves Of Fire. He appeared in Flying Saucer Rock 'n' Roll in 1997. Earlier this year Ardal was also invited to New York to film his own comedy special for the Comedy Central TV Network.

Ardal was fantastic. Many of our guests have told us that they found him to be hilarious. Conor and I thought he was absolutely brilliant. His choice of material and the way he dealt with the Irish and English in the audience was fantastic. His self-deprecating style was very warm. People were telling us that they literally laughed their way home from Doonbeg thinking about his jokes ... Please extend to Ardal our warmest thanks and our very best wishes. He is not only great on stage but a lovely warm man as well.

Clients often ask about purchasing books for giveaways and delegate packs. Below you’ll find a selection of products by Ardal O'Hanlon. Click the images to view on Amazon's website. For bulk orders, please speak with your Booking Agent.

How to book Ardal O'Hanlon for your event