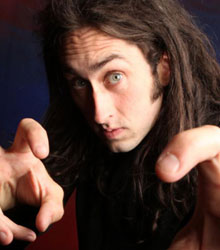 Although just 28 years old, Geordie Ross has been performing stand-up since he was smuggled into his local comedy club at the age of 15. Licensing laws meant that immediately after his slot he had to leave through the kitchen - but he has never looked back.

In the years since, Ross has become known as a truly exciting and genuinely original performer and has received huge critical acclaim. He is a former Perrier Award nominee and a Time Out award winner for best live stand-up and has won a shed load of other prestigious awards and nominations.

Throughout his career Ross has concentrated on playing live, relentlessly touring his own shows and as a result has built an army of fans throughout the world. His appearances regularly break box office records, and Noble has been the official 'best selling show' at both the Edinburgh and Melbourne International Comedy Festivals, on more than one occasion.

Ross has recently finished his third successive season in London's West End, with a month long season at The Apollo Theatre, Shaftesbury Ave.

In February 2004 BBC2 showed an hour long film of Ross performing live from his season at The Garrick Theatre, London. An extended version of this show was released on dvd in October 2004.

Ross has also been seen as guest on a variety of other TV shows including (in Australia) Channel Ten's 'Rove' and 'The Panel', ABC's 'The Glasshouse', and (in the UK) on BBC's 'Friday Night With Jonathan Ross' and 'Jack Dee Live At The Apollo.' He has also made three appearances on BBC 1's 'Have I Got News For You' and makes regular contributions to BBC Radio 4's 'Just a Minute' and has twice appeared on 'I'm Sorry I Haven't a Clue.' Ross' worldwide travels as a stand-up have been the subject of his own BBC Radio 4 series 'Ross Noble Goes Global'.

The night was fantastic, really well received by everybody here at MML... the Dynamo performance worked with him mingling as it created an atmosphere in amongst everybody. The Ross Noble second surprise worked really well too, a lot of people have said that it is someone that they would have loved to have seen but have not had the ability to do so – exactly what we want to achieve from the evening. So all in all, another very successful evening.

The supreme master of spontaneous stand-up and the most exciting comic in the country.

A natural comic with an instinctive gift for a vivid image. For once it is not hype to use the words 'comic genius

All good comics are adept at weaving the odd heckler or late-comer into a stream of material. But I have never before seen anyone create an entire first half -- about 50 minutes -- from rapport with a couple of customers in the front stalls.

How to book Ross Noble for your event