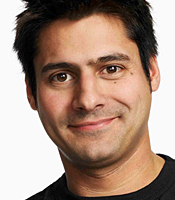 Danny Bhoy began his stand up career in 1998. A year later he won The Daily Telegraph Open Mic Award, the biggest national competition in the UK for new comics. In 2001, Danny debuted his first solo show at the Edinburgh Festival to audience enrapture and critical acclaim. Since then, he has continued to build on his stand up success in the UK, with 9 return visits to the Edinburgh Fringe, with his latest offerings packing out the biggest venues in town.

But, his success at home tells only a small part of the story. Since his first visit abroad to the Melbourne Comedy Festival in 2003, Danny has become one of the most globally successful and prolific comics working in the world today. Entering the Australian comedy market led to various Australian TV appearances on Rove Live, The Glass House, and the Melbourne International Comedy Festival Gala. In November of that year, Danny was also invited to perform on the Royal Variety Show.

He has built up a massive following in Australia, New Zealand and Canada, where he regularly tours record-breaking shows. As probably the most travelled comedian working in the world today, Danny's unique brand of story-telling and razor sharp wit has been described as “effortlessly funny”, and “the stand up equivalent of Bill Bryson”.

Danny Bhoy's first two DVD's ‘Live at The Opera House', and ‘Live at the Athenaeum' released only in Australia and New Zealand, enjoyed huge success. And in early 2012, Danny recorded his first worldwide DVD in his home town of Edinburgh, ‘Live At The Festival Theatre' which is scheduled for release in the UK this Autumn, and everywhere else soon after.

In addition to regular appearances on Canada's ‘Just For Laughs' galas, Danny has also performed TV spots on ‘Live At The Apollo' in the UK and ‘The David Letterman Show' in the US. He has also recorded a highly prestigious one-hour Comedy Central Special which aired in North America.

In early 2012, Danny returned to Canada for a massive theatre tour across the country, and later that year throughout theatres in the UK. Danny Bhoy's worldwide fanbase continues to grow at pace.In 2012 he also released his brand new DVD ‘Live at the Festival Theatre'.

Clients often ask about purchasing books for giveaways and delegate packs. Below you’ll find a selection of products by Danny Bhoy. Click the images to view on Amazon's website. For bulk orders, please speak with your Booking Agent.

How to book Danny Bhoy for your event