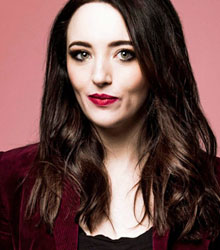 Featured in Vogue as one of the Top 5 Female Comedians as well as the Telegraphs Top 5 Young Comedians To Watch, Scottish comedian Fern Brady’s career has gone stratospheric in the last couple of years.

Born and raised in Bathgate, West Lothian, she studied at the University of Edinburgh and, whilst there, was editor of The Student, a weekly newspaper produced by students. Graduating with a Bachelor of Arts in Arabic and Islamic History, Fern originally trained to become a journalist, although she had been secretly harbouring desires to become a stand-up comedian since 2006.

Then, in 2009, whilst working as an intern at Fest Magazine, a free magazine covering the Edinburgh Festival, one of her assignments was to write an article about a comedy critic trying stand-up. It was a serendipitous ‘shove in the right direction’ she needed, and her first professional gig as a stand up comedian was in May 2010.

She went on to reach the finals of "So You Think You're Funny" at the 2011 Edinburgh Fringe, where she was placed joint third. She then secured a place in the finals of the Piccadilly Comedy Club new act competition in 2012 and the Hackney Empire New Act of the Year in 2013.

Fern career has gone from strength-to-strength ever since, having appeared on 8 Out Of 10 Cats, Seann Walsh's Late Night Comedy Spectacular, The Alternative Comedy Experience, BBC Radio 4's The News Quiz, The Russell Howard Hour, Live at the Apollo and Frankie Boyle's New World Order.

She has also written for The Guardian and supported Frankie Boyle and Katherine Ryan on Tour.

Fern possesses an abundance of confidence, and it’s well-earned, but with her down-to-earth persona it never verges on arrogant. One minute the audience is laughing at material about the Democratic Unionist Party leader Arlene Foster and the next at an anecdote about Fern’s classroom pet, yet the flow is never lost and the laughs never falter.

How to book Fern Brady for your event