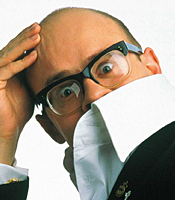 Harry Hill needs no introduction to a British TV audience, where with his series of the Broadcast award-winning Channel 4 series, 'Harry Hill' and 'Harry Hill's TV Burp', he became a firm favourite.

Real name Matthew Hall, Harry Hill was a doctor prior to taking the stand-up comedy circuit by storm. He stands out on the circuit with his surreal flights of fancy, switching at rapid-fire pace through several stream-of-consciousness stories that tie up perfectly. 'What are the chances of that happening?'

In 1992 he won the Perrier Best Newcomer Award at the Edinburgh Comedy Festival. Harry Hill's Fruit Corner and Fruit Fancies followed for radio. Then his own TV series followed for Channel Four. Arguably, this is when the influence of badgers on Harry's comedy came to the fore.

Harry Hill is regarded as one of the UK's finest and most original stand up acts. His unique brand of humour, interweaving running gags, music, short films and far-fetched yarns, has been rewarded with numerous awards, countless nominations and many accolades. Greatly admired across the Atlantic, Harry made a storming appearance on The Late Show (CBS). The show's host, chat-show-king, David Letterman, has since personally invited Harry back on the show five times - a record for a British stand-up.

Other TV appearances include his performance as Morrissey on Celebrity Stars in Their Eyes (ITV), his Royal Variety Performance (ITV) and being honoured on This Is Your Life (BBC).

The Success of Harry Hill's Whopping Joke Book (Faber) made him the best selling children's author of 2008 and was followed by the hugely successful Harry Hill's TV Burp Book (Ebury) in 2009. Other writing credits include:, Flight from Deathrow, (Time Warner) and his children's books Further Adventures of the Queen Mum, Tim The Tiny Horse and Tim The Tiny Horse At Large (Faber and Faber). In 2010 Harry released his comedy show business diary Livin' The Dream (Faber).

I was stunned by Harry Hill's genius... such energy, originality and wit and he leaves you breathless with the many turns his extraordinary mind takes.

Clients often ask about purchasing books for giveaways and delegate packs. Below you’ll find a selection of products by Harry Hill. Click the images to view on Amazon's website. For bulk orders, please speak with your Booking Agent.

How to book Harry Hill for your event