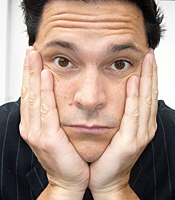 Since TRIGGER HAPPY TV, Dom Joly has continued to make edgy and entertaining TV, including WORLD SHUT YOUR MOUTH for BBC1 and THIS IS DOM JOLY for BBC3. He presented and wrote DOM JOLY'S HAPPY HOUR a spoof travel show for Sky One, and most recently presented THE COMPLAINERS for FIVE.

Dom Jolly has a serious side too, having been the political researcher for the Mark Thomas Project and ITN's political producer. He is an award winning travel writer for the Sunday Times and also writes an eclectic weekly column for the Independent on Sunday, covering subjects as varied as Middle East politics, fifty-foot chickens and stalking Liz Hurley.

Dom linked up with Cadburys in 2008 to create a series of online films as part of their Twisted campaign. He's also done viral campaigns for Tango, Comet and Barclays and is popular on the corporate after dinner speaking circuit.

Dom Joly is a hugely versatile performer and presenter whose often manic style belies a perceptive awareness, he is a highly polished star of the entertainment world.

Clients often ask about purchasing books for giveaways and delegate packs. Below you’ll find a selection of products by Dom Joly. Click the images to view on Amazon's website. For bulk orders, please speak with your Booking Agent.

How to book Dom Joly for your event