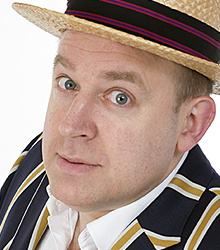 Tim Vine is a joke machine gun. At full speed he pelts out over ten jokes a minute. Gag follows gag follows gag. King of the one-liners... The pun-meister general...

Watch in amazement and try and remember to breathe. Tim also won the Perrier newcomer award at the Edinburgh festival for his show The Tim Vine Fiasco (1995). Further sell-out Edinburgh shows followed, The Tim Vine Shambles (1996), Tim Vine Flat Out (1998), Tim Vine and The Minotaur and I'm Vine Thanks (1999).

Tim is a regular headline act on the London comedy circuit and in 2001 he stormed the Royal Variety show in front of Prince Charles (and an audience).

He said 'I'm going to chop off the bottom of one of your trouser legs and put it in a library.' I thought 'That's a turn-up for the books.'

So I was getting into my car, and this bloke says to me 'Can you give me a lift?' I said 'Sure, you look great, the world's your oyster, go for it'.

You know, somebody actually complimented me on my driving today. They left a little note on the windscreen, it said 'Parking Fine'. So that was nice.

TV CREDITS
The Sketch Show (2002). The first series won a BAFTA award and the second series is due to be screened shortly. Tim was the first male to appear on Channel Five (1997). He also hosted the game show Whittle (1997) and he hosted Fluke on Channel Four (1997) - A show he devised himself and which was nominated for the Golden Rose of Montreux.

He also hosted Housemates on BBC 1 (1995). Tim has appeared as a guest on many TV shows too numerous to mention like The Des 0'Connor show, Call my Bluff, The Stand up show and many more.

Please pass on my gratitude and thanks to Tim Vine for being so amazing on the evening. He did an exceptional job and really got the crowd going ... It was also very nice that he wanted to stay after the awards, I delayed his taxi and he mingled with the guests and band.

Clients often ask about purchasing books for giveaways and delegate packs. Below you’ll find a selection of products by Tim Vine. Click the images to view on Amazon's website. For bulk orders, please speak with your Booking Agent.

How to book Tim Vine for your event