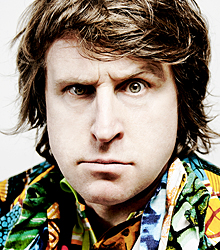 Award-winning comedian Milton Jones is best known for his deadpan delivery of one-liners and puns in a slightly neurotic style... that, plus his wild hair and colourful Hawaiian shirts.

The proud Winner of the 2011 'Best Headliner' at the Chortle Live Comedy Awards and Winner of the Time Out Best Comedy Performance 2003, Milton previously won the prestigious Perrier Best Newcomer Award at the Edinburgh Festival in 1996 for his first solo show and returned in 1997 to become a Perrier Nominee.

Milton has co-written and performed in 12 of his own radio series for BBC Radio 4. The most recent series, Thanks a Lot Milton Jones won the prestigious New York Festival Silver Award for Best Regularly Scheduled Comedy Programme and in 2012 Another Case of Milton Jones won the Silver Sony Award for Best Comedy at the 30th Sony Radio Academy awards.

Milton has also written a novel called Where Do Comedians Go When They Die? which was described by the crimewriter and comedian Mark Billingham as “Hilarious, moving, and truthful. Finally a book that tells you what it’s really like to tell jokes for a living. And no-one tells jokes better than Milton Jones”.

Milton is regularly seen on Mock the Week, can be heard on BBC Radio 4’s The Newsquiz and is a regular performer at The Comedy Store in London and Manchester.

Other television credits include Michael McIntyre’s Comedy Roadshow (BBC1) and Dave’s One Night Stand (Dave). His sitcom pilot The House of Rooms co-written with Dan Evan was broadcast on Channel 4.

Milton was absolutely brilliant…in fact he was the best ever! The whole audience was in fits of laughter and I have not belly laughed like that for a long time. I would say at least half his audience got up and shook his hand afterwards. He was a huge success and what a nice fella he is.

Milton was very well received and did a fantastic job in revitalising what had become a very traditional format. They now have an appetite for more adventurous performers" - Chamber of Commerce.

Clients often ask about purchasing books for giveaways and delegate packs. Below you’ll find a selection of products by Milton Jones. Click the images to view on Amazon's website. For bulk orders, please speak with your Booking Agent.

How to book Milton Jones for your event