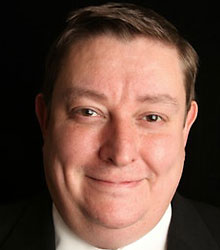 John Moloney has been a professional comedian for over thirty years and has delighted audiences far and wide with his crafted, intelligent and original brand of stand-up comedy. John is a highly sought-after comic and musician, and has worked in Australia, New Zealand, Ireland, the USA, Germany, Hong Kong, Dubai, Amsterdam and China.

John was also delighted to be nominated as ‘Best Live Stand-Up’ at the British Comedy Awards – but was even happier to be the WINNER in the category “Outstanding Contribution to UK Comedy” in 2015.

Following the success of a previous trip to the Just For Laughs Festival in Montreal, John enjoyed a triumphant return, where The Gazette newspaper said of him: 'Seriously smokin' jokes... one of the funniest from this year's comedy festival. He was then invited to attend the Just For Laughs Roadshow in Singapore.

Winner of the Best Live Performer award for two years running at the London Comedy Festival, voted by the membership of Jongleurs, the largest chain of comedy clubs in Europe, John Moloney has become one of Britain's most in-demand comedy acts, a true comic and musical talent.

John appears regularly at The Comedy Store and Jongleurs, and has performed many times at the Edinburgh Festival, playing to sell-out audiences.

John Moloney co-wrote on the Olivier Award winning Jack Dee Show in London's West End and has appeared as a regular Presenter on Richard and Judy (Channel 4), guest-appeared on Des and Mel (ITV), The Wright Stuff (channel 5), World Of Comedy (paramount), Lorraine Live (Sky One), Live at Jongleurs (ITV), The Comedy Store (Channel 5), They Think It's All Over (BBC1), Have I Got News For You (BBC2), Never Mind The Buzzcocks (BBC2) and The Des O'Connor Show (ITV).

He was nominated by the Comedy Store in the category Best Live Stand-Up at the British Comedy Awards.

John Moloney is also regularly in demand on the Corporate Circuit as an after-dinner speaker, and has enjoyed repeat bookings from his cherished clients. He is fluent in German and French and has a working knowledge of Italian, and has delighted clients in Berlin, and Paris, as well as other European Cities.

The very positive reaction of both audiences is a testament to John's ability to accurately pitch his content to amuse and entertain both our internal and external group and the applause and laughter was the true measure of how successful both events were.

Thank you so much for your performance. Everyone in the office has said what a great job you did and we have had several guests telling us that you actually had the whole table of them crying with laughter! Other people have said that they were nearly wetting themselves! Good feedback I hope you agree. On a personal note I found you very warm, funny and professional. It was a great pleasure to have had you at our first ever OSC' Magazine Awards Dinner and also for myself as it was the first ever event I've organised for the company.

One of the best things about watching live comedy is seeing a comedian get his second wind of inspiration. Sometimes an established comic suddenly finds something extra, and one of these comics is John Moloney. He's been a headliner at top clubs like the Comedy Store for years - yet his comedy has acquired more depth, as well as an even sharper edge.

John Moloney is one of the most creative and professional comedians I have had the pleasure to work with - quick off the mark - John will have had the audience laughing three times in the time that it takes any other comedian to say 'hello'... The comedy scene would be a poorer place without him. John is a firm favourite of the Comedy Store - and a firm favourite of mine

Yet again we were most delighted with your performance for our clients Kia Motors at The Lancaster Hotel. It is testament to your excellent comedy routines and exquisite professionalism that Kia wanted you back for a second year running, on the personal request of their Managing Director Paul Williams. You pitched your material with great precision, and had the audience in rapturous laughter. Your material was fresh, topical and hilariously funny. Thanks for giving our clients such an enjoyable evening. All the best – and we look forward to working with you again at the next possible opportunity.

How to book John Moloney for your event