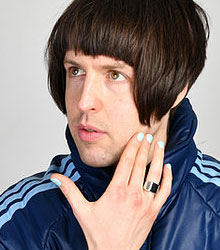 A club and festival favourite around the UK, Tom Ward has been seen on Comedy Central’s Roast Battle, Stand up Central and Live From The Comedy Store.

He made a name for himself in comedy as a finalist in the BBC Radio New Comedy Award 2014, Leicester Square New Comedian Final 2013 and NATY Final 2014. He went on to forge a successful and unique path in the industry, with his inventive style incorporating his voice-over talents and improvisation, in addition to his innovative writing.

In May 2015, Tom was booked to perform two shows at Utrecht International Comedy Festival, one of 50 comics from around the world hand-picked for the event.

In 2018/19 he presented the series ‘In My Personal Space’ with Ladbible and Wrigley's. Seen by millions he brought his unique style to interviewing celebs such as Kyle Walker, Lady Leeshurr, Jamie Laing and Raleigh Ritchie in a truly up close and personal encounter.

He has performed three solo comedy shows at The Edinburgh Fringe, receiving 5* reviews for each. In 2018, he was Joe Lycett’s official tour support and in 2019 supported Jack Whitehall on his warm up tour.

With his corporate hosting work, Tom Ward tailors his set to each event, carefully researching the industry he’s representing, as well as using sound effects and music for a real one off experience.

Equal parts hilarious and bizarre…One of the most impressive, distinctive newish acts around

Bruce Dessau, Beyond The Joke.

Unique, unpredictable, and able to carry off jokes about the oddest of things…Definitely someone to look out for

Fine writing, evoking silly images and ideas, combines with a distinctive look to make him memorable

How to book Tom Ward for your event