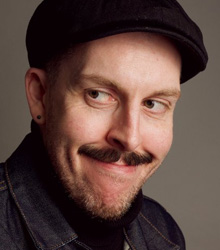 Carl started performing stand-up in 2005 and quickly established himself as one of the UK's most exciting young comedians. His conversational, silly sense of humour saw him win a host of awards (Chortle Best Newcomer 2007, Leicester Mercury Comedian of the Year 2007 among others) and become a regular at all of the finest comedy clubs in the UK and Ireland.

In 2009, Carl performed his debut solo show 'Relax Everyone, it's Carl Donnelly!' at the Edinburgh Fringe for which he was nominated for the 'Edinburgh Comedy Award for Best Newcomer'. Since then, Carl has returned to Edinburgh with two further solo shows and is set to return to the Festival this year with a new show, after his nomination in 2013 for the Fosters Comedy Award.

Recently, Carl has been developing as an international act, with a successful tour of Australia and New Zealand in 2013 and a second coming up this year, as well as performing at the biggest comedy festivals in the world (Montreal Just for Laughs, Melbourne International Comedy Festival, Sydney Comedy Festival, Kilkenny Cat Laughs etc).

Carl has also appeared on various TV shows including Mock The Week, Dave's One Night Stand, Stand Up for the Week, Russell Howard's Good News and Comedy Store. He is also a regular on radio appearing as a guest on such shows as BBC 5live's 'The Back End of Next Week', Radio 4's 'Loose Ends' and 'Act Your Age' as well as being a regular guest on talkSPORT. He has also recently started co-hosting a radio show for the Fubar Radio app after his acclaimed podcast which he recorded with Chris Martin.

Carl Donnelly has developed a style that is the antithesis of the loud, sweaty, manic comic so prevalent on the telly and live tours at the moment. This is stand up with valium: near horizontal levels of louche that take the mundane stories of everyday life and turns them into stretches of self deprecating silliness.

It went really well, Carl Donnelly is brilliant! And great to work with, our Editor is very happy.

How to book Carl Donnelly for your event