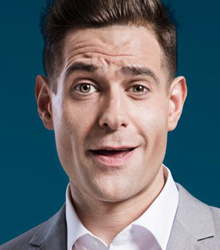 In character as ‘wide boy’ Lee Nelson, Simon has hosted and appeared on Live at the Apollo as well as releasing his first Live DVD and touring the country.

Simon Brodkin originally trained as a medical doctor and qualified from Manchester University in 2001. However, he relinquished his GMC registration in 2007 to concentrate on his comedy career. He performed his first solo show at the Edinburgh Festival Fringe in 2006, titled Simon Brodkin: Everyone But Himself.

Simon has taken five hit solo shows to the Edinburgh Festival Fringe, where he won the Writer's Guild Award for Best Newcomer in 2006. His 2008 show was praised for Simon's 'sharp, quick-fire verbal sparring' (The Scotsman) as well as his 'solid gold material' (Chortle). In 2010 he took Lee Nelson's Well Good Edinbra Show to the Fringe, selling every single ticket and receiving rave reviews, with a follow-on nationwide tour of Lee Nelson's Well Good Show.

Reviewing Lee Nelson in 2009, James Kettle of The Guardian stated that, in comparison to Matt Lucas's aggressive Vicky Pollard, and Catherine Tate's Lauren Cooper, Brodkin's portrayal has "a three-dimensional personality" and is a "gentler, more likeable soul, with a dopily comprehensive lack of self-awareness", and that in playing the 'chav', "no one's done it quite like Simon Brodkin".

On behalf of everyone at AFC Bournemouth we wanted to thank you for your assistance, and Simon Brodkin for his comedy set as Lee Nelson. We thought Simon did such a fantastic job at our Player Awards Night, and we are delighted with how the night went. We have since received some great feedback from the guests, particularly in respect of Simon’s act.

The event went very well and Simon was a great choice – got lots of positive feedback from our people. Plenty of laughs and interaction with the audience. Fantastic and chuffed to bits. Thanks for all your help.

We were really delighted with Lee Nelson last Thursday at the Best Awards. He went down a storm. He totally understood our advertising audience and played up to it well. The pace for the awards presentation was extremely well measured. We do have quite a lot of awards but it didn't feel rushed and his humour throughout kept it very entertaining. (Normally for our awards the stand-up element is the fun part and the presentation of awards is a bit of a process, but we thought the presentation was as equally as good too!) Overall I thought Lee Nelson was extremely professional, very funny... and now I've got a difficult job to select someone to follow him for next year!

Clients often ask about purchasing books for giveaways and delegate packs. Below you’ll find a selection of products by Lee Nelson. Click the images to view on Amazon's website. For bulk orders, please speak with your Booking Agent.

How to book Lee Nelson for your event