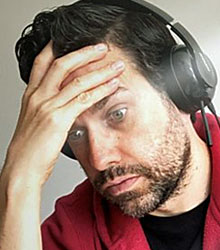 Michael Spicer is a comedy writer, actor, director and the creator of the Internet sensation, The Room Next Door — with 50 million views and counting.

After several months posting the videos across his social media channels, Michael made his Room Next Door debut on The Late Late Show with James Corden in October 2020, and also featured on BBC Two’s popular satirical show The Mash Report.

The Room Next Door videos are two-minute skits in which Michael Spicer plays a fictional and highly frustrated political adviser who’s communicating live via an earpiece with a prominent figure that’s delivering a public speech.

Desperately trying to prevent leading politicians from making excruciating blunders and gaffs, the videos cut back and forth between an exasperated Spicer and genuine footage of the public figure at a real speaking engagement.

Michael explained in an interview with the Evening Standard newspaper how the idea came about. “It started with Boris Johnson and his model bus hobby”. He was watching the then Tory leadership hopeful give an interview to TalkRadio in which he described transforming wine crates into double-deckers in his free time. “He seemed to be having an internal battle with himself – as though he didn't know whether to make something up or admit that he actually liked building them.”

At that point, Spicer pictured someone behind-the-scenes, feeding lines into the future Prime Minister’s ear to help him answer the questions. He put his children to bed that evening and set to work pulling the whole thing together, acting out what he’d do if he really was in a room next door with an earpiece.

Already working as a copywriter, director and actor, Michael uploaded the video that night to his YouTube channel and by morning it had gone viral.

Creating each skit, Michael confesses that finding material is the easy part and it pretty much falls into his lap. “Just by giving a spluttering interview, 70 per cent of the material is already written – all I have to do is cut it up. Like when Home Secretary Priti Patel talked about tackling ‘counter-terrorism’ eight times instead of saying ‘terrorism’ – you barely have to do any work on that as a comedian; it’s basically all ready to go.”

In recognition of his creation, Michael Spicer won the Internet category at the 2020 Chortle Awards. The Room Next Door has also resulted in a Radio 4 pilot which broadcast in June 2020, a book - The Secret Political Adviser - published by Canongate in October 2020, and a TV adaptation which he is currently developing.

However, The Room Next Door isn’t just about politics. He performed a live show where he covered Justin Bieber at an awkward interview in Japan and Jose Mourinho walking out of an interview. Ultimately, it all comes down to who’s making the biggest gaffes.

Are you looking to liven things up with something original and unique at your next conference, away day or company gathering?

Michael Spicer Tells Your Boss What To Say
‘The Room Next Door’ creator, Michael Spicer, is the voice in your boss’s in-ear monitor in this all-new and bespoke show available exclusively for your next business event.

Break up a serious days’ agenda with some light-hearted relief from the latest Internet sensation. Whether it’s a virtual conference online or in-person with everyone gathered together, following your CEO’s keynote speech to open the conference, to an attentive audience, Michael Spicer will set to work over the next couple of hours taking apart the filmed speech, and replay it later in the day, adding his own commentary and “behind the scenes” in-ear commentary to your boss!

As with the real ‘Room Next Door’, each skit is a unique and bespoke creation. So pick up the phone to your NMP Live agent to discuss your event and how an appearance from the man in The Room Next Door can add some fun and originality to your next event.

How to book Michael Spicer for your event