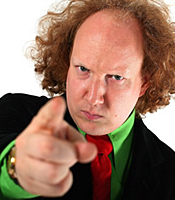 Stand-up comedian, broadcaster and author, Andy Zaltzman has firmly established himself in the vanguard of British comedy with his unique brand of political satire.

He is the host of BBC Radio 4's The News Quiz and, alongside John Oliver, has co-written and hosted well over 100 episodes of The Bugle; an ongoing series of satirical news podcasts, produced in association with The Times. He has also written for, and performed on, John Oliver's one hour Comedy Central stand up special Terrifying Times, plus Radio 4's The Now Show and BBC2's Mock The Week.

Also alongside John Oliver, Andy Zaltzman has co-written and hosted the BBC Radio 4 show Political Animal, based on their satirical live stand-up show, and has co-written and starred in three series of BBC Radio 4's satirical show, The Department. He previously hosted numerous series including My Life As A…, Empire-ical Evidence, Andy Zaltzman's History of the Third Millennium, Series 1 of 100

His numerous and diverse TV appearances include Pointless Celebrities (BBC One), 8 Out of 10 Cats (Channel 4) and Unspun with Matt Forde (Dave).

Andy's live work has drawn audiences around the world, touring his bespoke political comedy show Satirist for Hire around the UK, Australasia, Canada and the USA. He has been a regular at the Edinburgh Fringe since his nomination for the Perrier Best Newcomer Award in 2001, building his reputation as one of the most inventive satirists in the world.

In 2007, Andy performed an award-winning Melbourne Festival debut, winning the Piece Of Wood Award as the comedian's comedian. His annual round-up shows of the events of the year have become a fixture in the satirical calendar at London's Soho Theatre.

His first book, a satirical take on the 'credit crunch' entitled Does Anything Eat Bankers?, was published in 2008.

In addition to his comedy work and a keen interest in politics, Andy Zaltzman is an avid fan of sport and has hosted Yes! It's The Ashes for BBC Radio 5 Live. He has also appeared on sporting punditry show Fighting Talk and is well known as the BBC's cricket statistician on Test Match Special. He commentated the BBC's coverage of the World Cup and has covered sport for The Guardian.

Probably one of the finest satirical comedians this country's ever produced.

Clients often ask about purchasing books for giveaways and delegate packs. Below you’ll find a selection of products by Andy Zaltzman. Click the images to view on Amazon's website. For bulk orders, please speak with your Booking Agent.

How to book Andy Zaltzman for your event