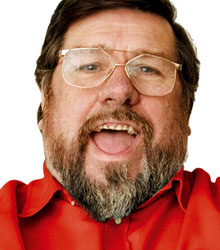 To millions, Ricky Tomlinson is Jim Royle, star of the hit BBC series The Royale Family. Ricky's had considerable success as an actor, appearing as Bobby Grant in 'Brookside' (1982-1988) and DCI Charlie Wise in 'Cracker'. In 2002 he starred in the BBC TV Series Nice Guy Eddie' playing a Liverpool private investigator and he featured heavily in BAFTA nominated series two of Paul Abbott's series Clocking Off.

He has also starred in several films, notably 'Mike Bassett: England Manager', 'Raining Stones' and 'Hillsborough', a made-for-TV film about the families' of the victims of the Hillsborough Stadium disaster, in which he portrayed John Glover - the father of victim Ian Glover. However, Ricky's transformation to national superstar came in 1998 when, reunited with his Brookside screen wife Sue Johnston, he starred as grumpy Dad in The Royle Family.

Ricky has fronted a series of television adverts for the utility company British Gas and in 2010 appeared in a series of advertisements for the frozen food chain Farmfoods. In March 2011 he acted in an advertising campaign for furniture and furnishing store, The Range.

But behind the extraordinary success lies a story of poverty, prison and banjo-playing. Thirty years ago, Ricky Tomlinson languished in a prison cell in solitary confinement, a radical and uncompromising trade unionist imprisoned for his political beliefs.

The story of Ricky Tomlinson is really the story of two men. One, a natural performer with a talent to amuse: teller of corny jokes, seasoned actor and banjo virtuoso. The other, an unrepentant working-class warrior, a radical Socialist who has staunchly refused to compromise his old-fashioned ideology.

Ricky Tomlinson was born in Liverpool in 1939, during the first month of the Second World War. His childhood was hard: "I'm not getting the violin out," he told an interviewer, "but there were six of us in a two-bedroom house".

The son of a baker, early hopes of a career as a footballer (he was offered, but turned down, a trial for Scunthorpe United) took second place to playing banjo in Liverpool's pubs and clubs. He eventually moved to Wrexham after meeting and marrying a local woman and he found work digging holes for a construction company building the A483 Wrexham bypass.

Then came his involvement in the 1972 builders' strike during which he organised flying pickets and refused to testify in court against his fellow strikers. This earned him a two-year prison sentence for conspiracy which he has said he will challenge in court. Ricky served his time in 14 prisons, mostly in solitary confinement because, as he puts it: "I wouldn't wear any clothes."

On his release from prison in 1975, Ricky Tomlinson found himself blacklisted from the building trade so he set himself up as an entertainer, theatrical agent and pub landlord, to varied success. His life was transformed in 1980 when the director Alan Bleasdale, who had seen Tomlinson's stage routine a year earlier, cast him in a minor role in the acclaimed series Boys From The Blackstuff, and the rest, as they say, is history.

Ricky Tomlinson is a popular host for award dinners, ideal for ribbon-cutting and personal appearance events.

Clients often ask about purchasing books for giveaways and delegate packs. Below you’ll find a selection of products by Ricky Tomlinson. Click the images to view on Amazon's website. For bulk orders, please speak with your Booking Agent.

How to book Ricky Tomlinson for your event