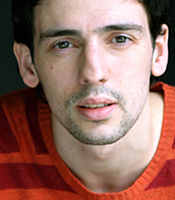 Ralf Little became a household name at eighteen playing “Antony” in the multi-award winning comedy phenomenon “The Royle Family”. Since this success he has carved out a career as one of Britain's most enduring young stars, and has recently been seen in the BBC One hit “Our Zoo”.

He has starred in several noteworthy British films, all of which achieved great critical success. Examples include “24 Hour Party People” (dir. Michael Winterbottom), “The Waiting Room” (dir. Roger Goldby), and “Telstar” (dir. Nick Moran), alongside actors James Corden, Matthew Baynton, and Kevin Spacey.
In 2008 he decided to try his hand at writing, and – to his surprise as much as anyone else's – it turned out that his first attempt was a success! Having penned two series of the critically acclaimed Sky One comedy “The Café”, he was invited to write a one off episode for the Sky “Playhouse Presents” strand, and his effort, “Space Age” (starring Richard Wilson, Simon Callow, and Robert Vaughn) broke all the ratings records for its transmission slot (700% above the average) and was featured prominently in respected publications such as GQ and Vanity Fair magazines.

Ralf Little is a natural and relaxed presenter with an impressive string of credits to his name. Among other things, he has hosted Sir Alex Ferguson's Golf Dinner twice, presented awards for the BAFTA Videos Games Awards, hosted GQ Man of the Year Awards and he bi-annually facilitates live football Q&As at BAFTA.

He is passionate about football, having played semi-professionally, and would be perfectly suited to any event with a sporting or football connection. In addition, he's an avid fan of gaming and technology, making him the ideal choice for technology themed events.

How to book Ralf Little for your event