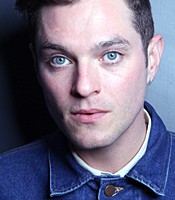 Mathew began his career as a stand-up comedian and later became one half of the comedy duo Mat and MacKinnon - first performing at the Edinburgh Festival in 2000. He was spotted at the festival by Catherine Tate who invited him to perform in The Catherine Tate Show.

In 2003, he starred in Channel 4's 20 Things to do Before You're 30 and a year later earned the role of Ben, an atheist RE teacher, in the Channel 4 hit series Teachers. In 2007 he starred in the BBC sitcom Roman's Empire and in November that year appeared in comedy sketches in The Kylie Show on ITV1 alongside Kylie Minogue, playing her assistant.

Mathew also featured the Sheriff's court jester in the second series of Robin Hood, aired on BBC One at the end of 2007. He as also appeared in the first series of ITV production Doc Martin.

In 2008 Mathew appeared in a modern adaptation of the Three Billy Goats Gruff as part of the BBC's Fairy Tales season. He has performed voice-over work for the ITV2 series The Passions of Girls Aloud and appears in the film Lesbian Vampire Killers. He made his stage debut in a 2009 revival of Entertaining Mr Sloane at the Trafalgar Studios.

Mathew Horne also guest-stars in the video for The Maccabees' 2009 free-download single "No Kind Words" and in February 2009 he presented the Brit Awards alongside James Corden and Kylie Minogue. He has also appeared in an episode of Miss Marple alongside fellow Gavin and Stacey star Ruth Jones.

Since working on the BBC sitcom Gavin and Stacey, he has collaborated a number of times with its co-creator James Corden. They presented the Big Brother spin-off show Big Brother's Big Mouth as guests in 2007 and were then regulars for the run covering E4's Big Brother: Celebrity Hijack. Together they presented the NME Shockwaves Awards in 2008 and a section of Comic Relief in March 2009.

In 2008 Mathew Horne and James Corden toured the UK in preparation for their BBC sketch show Horne & Corden. The first episode was broadcast in March 2009 on BBC Three. It was presented in front of a live audience, in a style reminiscent of Morecambe and Wise or The Two Ronnies. A variety of pre-filmed sketches and live performances were included.

Mathew Horne was nominated for Best Male Comedy Newcomer at the 2007 British Comedy Awards, and is himself highly sought-after as an awards host for prestigious events throughout the UK.

Mathew Horne is also an accomplished DJ, establishing himself on the club circuit playing either commercial indie (both old and new) or a dance mix of electro and hip hop.

Clients often ask about purchasing books for giveaways and delegate packs. Below you’ll find a selection of products by Mathew Horne. Click the images to view on Amazon's website. For bulk orders, please speak with your Booking Agent.

How to book Mathew Horne for your event