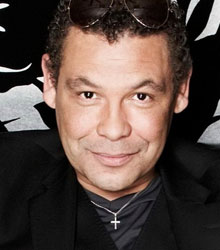 Craig Charles will forever be remembered for his role in the hugely successful BBC2 comedy sci-fi Red Dwarf, playing Dave Lister - the curry-devouring, last-surviving human - alongside fellow comedians Chris Barrie and Robert Llewellyn. Together with Danny John-Jules (Cat), he is one of only two cast members to appear in every episode of Red Dwarf to-date

And from Red Dwarf to Robot Wars to Radio 6 and Radio 2 via the cobbles of Coronation Street, Craig’s career has seen him transform from respected actor to musical icon with two decades of broadcasting under his belt.

Craig’s pioneering BBC 6 Music Funk and Soul Show was born in 2002 and has since broadcast live every Saturday night with an assortment of emerging talents and classic gems, earning him global support and recognition as one of the UK’s foremost funk and soul tastemakers, DJs and promoters of new music.

At the tender age of 12 Craig was awarded The Guardian Poetry Award — the runner up was 33 years old! He began his career journey as an urban performance and contemporary poet on British cabaret circuit — his performances were so original that he was said to have a natural ironic wit which appealed to talent scouts.

At Teardrop Explodes concert in 1981, Charles recited a humorous poem about the band’s singer. He was later invited by the group to open their subsequent gigs. He went on with performing in clubs and pubs as a support act for the three years that followed.

Craig Charles involved himself in the Liverpool music scene through writing and singing for several local bands. He played bass, keyboards and provided a voice for the rock band called Watt 4. His first professional engagement was in 1983 when he was invited on John Peel’s BBC Radio show to perform his poems while backed by a band.

As his career grew, Craig realised he could use his sense of humour to progress into stand up comedy. In 1986, he took part in the Red Wedge comedy tour that was aspiring to raise awareness of the social problems of the time, in support of the Labour Party. He performed his one-man show for the first time in 1986 that premiered in Edinburgh and then he toured internationally.

In 1988, Craig Charles acquired cult celebrity status on TV playing the character of Dave Lister in BBC2 sci-fi comedy series Red Dwarf. He played this role in all the eight series until 1999 and then from 2015 in the revival for series 11 and 12.

Craig presented Robot Wars on BBC2 from 1998–2003 and then its relocation to Channel 5 from 2003–04, from series 2 until series 7, where he was the main host and presided over the arena in which teams of amateur engineers battled their home-made radio-controlled robots against each other and against the house robots.

He joined the main cast of Coronation Street in 2005 playing taxicab driver, Lloyd Mullaney. However, in 2015, he left the show after ten years to film new episodes of Red Dwarf and to continue his BBC Radio 6 Music and BBC Radio 2 broadcasting.

For music festivals plus corporate and private events, celebrity DJ Craig Charles brings his infamous Funk and Soul Club live to you.

Charles plays a mixture of well-known, classic funk and soul tracks, usually covered and remixed by current leading bands and DJs, along with the latest new danceable songs.

He is also available for hosting corporate award dinners and similar events.

How to book Craig Charles for your event