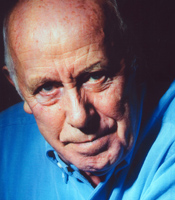 Richard Wilson's portrayal of Victor Meldrew in One Foot in the Grave has won him numerous awards including the British Comedy Awards Top Television Comedy Actor Award and two Light Entertainment BAFTA Awards.

In 1994 Richard was awarded the OBE for services to drama as a director and actor.

Apart from six series of One Foot in the Grave and six Christmas Specials, leading television roles include: Life Support, In the Red and The Lord Of Misrule all for the BBC and four series of Only When I Laugh (ITV). He is renowned for his role as Eddie Clockerty in the award-winning BBC drama series Tutti Frutti and the LWT comedy series Hot Metal which was written by Andrew Marshall and David Renwick.

Born in Greenock and trained at RADA Richard's theatre work includes: Krapp's Last Tape for Sheffield Crucible Theatre, A Little Hotel on the Side at the Theatre Royal Bath directed by Lindsay Posner, Malvolio in Twelfth Night (West End and RSC) directed by Greg Doran. Whipping It Up directed by Terry Johnson at The Bush Theatre and due to its immense success transferred to the West End, then toured.

Richard Wilson starred as Hook/Darling in Peter Pan at the Royal Festival Hall, directed by Ian Talbot. He guest starred with The Right Size in The Play What I Wrote in the West End directed by Kenneth Branagh. Played Vladimir in Waiting For Godot at the Royal Exchange theatre Manchester, Dr Rance in What The Butler Saw at the National Theatre. The Weekend (by Michael Palin), on tour and in the West End. He has also played the title role in Uncle Vanya and Vladimir in Waiting for Godot at the Traverse Theatre, Edinburgh.

Film work includes: Love And Other Disasters, Women Talking Dirty, The Man Who Knew Too Little, A Passage to India, Whoops Apocalypse, Gullivers Travels, Prick Up Your Ears, Fellow Travellers, How To Get Ahead In Advertising, A Dry White Season, Carry on Columbus and Soft Top Hard Shoulder.

Richard is also a well regarded Director. He is an Associate for Sheffield Theatres and a former Associate of the Royal Court Theatre.

Extensive Directing work includes: Primo at the National Theatre starring Antony Sher which transferred to Hampstead and then to Broadway. He also directed the film version for HBO/BBC. Work at Sheffield Crucible Theatre includes: That Face, The Pride and Lungs (co-produced by Paines Plough), Straight which transferred to The Bush Theatre and Love Your Soldiers. Smack Family Robinson at the Rose Theatre, Kingston. Most recently he directed New Labour at RADA and Blasted as part of the Sarah Kane Season at Sheffield. Next year he will direct The Nap at Sheffield Crucible Theatre.

In 2013 Richard was presented a BAFTA Scotland Award for Outstanding Contribution to Television and Film.

How to book Richard Wilson OBE for your event