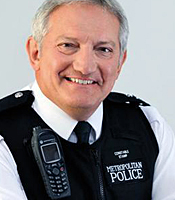 Graham Cole was one of The Bill's longest-standing cast members playing loveable PC Tony Stamp from 1984 until the show's demise in 2009 - appearing in a mammoth 601 episodes.

Graham entered the industry in 1974 beginning as a Butlin’s Red Coat entertainer where he met his wife, Cherry, while she was staying at the holiday camp. Just one audition later that year gave him the first of 16 pantomime roles from Jack and Aladdin to Princes, Kings and Emperors. Having turned his attention to characters like 'Flesh Creep', Graham has now become one of the best baddies on stage.

He spent a season with the famous Fol-De-Rols becoming comic feed to some of the truly great comics of British Theatre giving him a unique start to a wonderful and varied career. Other theatre roles include Tony in Abigail's Party, Pilate and Ciapha in different productions of Jesus Christ Superstar, Ernst Ludwig in Cabaret along with many Neil Simon plays.

He has appeared on numerous panel shows, and alongside Andrew Paul (PC Quinann) where they had a stint on Noel's House Party, bringing a whole new meaning to 'I'll have chips with mine!' He has worked with the late Kenny Everett and had the honour of creating Melkur, marsh man for Dr Who.

Graham Cole's introduction to The Bill came about when he was brought in by the producers to perform fight sequences, but using his old tricks decided 'You have to take chances in this game, doing oddball stuff in the background. Even if I was in custody and the camera was going past I would be doing something wrong.

I would make sure I was chewing gum or had my feet on the desk. Cameramen and writers pick that up. It's silly things that work well, like if an Inspector walks in I would hurriedly shut the filing cabinet and leave it to the audience to wonder what I was up to. That comes from rep theatre.'

What you might not know is that, from day one on The Bill, Graham Cole performed all his own stunts, including car stunts. He always loved racing cars and when he was offered driving training at Hendon Graham leapt at the chance. 'They've been good to me at Hendon over the years. I've been on their skid pan many, many times but have to say I'm no better than I was the first time!'

Graham Cole spends a lot of his spare time undertaking charity work and hosting 'The Bill' themed nights and after dinner Q&A sessions creating unique entertainment enjoyed by corporate clients and the real police at events both here and abroad in countries where The Bill was televised.

Graham’s autobiography, On The Beat, was published in 2009 by Splendid Books.

Clients often ask about purchasing books for giveaways and delegate packs. Below you’ll find a selection of products by Graham Cole. Click the images to view on Amazon's website. For bulk orders, please speak with your Booking Agent.

How to book Graham Cole for your event