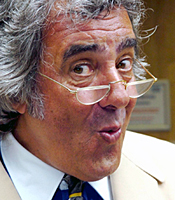 David Dickinson first came into the public eye when presenting Bargain Hunt for BBC1; his unique style, cheeky screen persona and irrepressible enthusiasm have all combined to create a cult hero. His brand new series Dickinson's Real Deal for ITV1 was immediately re-commissioned and the 2nd series is currently transmitting daily on ITV1.

David has been dealing in antiques for over 30 years. After successfully running his own shop he began concentrating on antique fairs, taking stands at Olympia and other major exhibitions, mainly dealing in 18th and 19th century furniture and extraordinary works of art. His television work and personal appearances now keep him constantly occupied, and the antique fairs have had to be put to one side for the moment.

David was first seen on our screens in a documentary made by the BBC exploring the world of antiques dealers. He went on to present The Antique Hunter for Channel 5 and The Antique Buyer's Guide for BBC2. David was then asked to present Bargain Hunt for BBC1, which soon became one of their major flagship shows. This programme was voted Most Popular Daytime Programme in the prestigious National Television Awards in October 2002 and since this award, David has gone on to record further programmes of Bargain Hunt both here and in America for prime-time television. Most recently David was the subject of Who Do You Think You Are? for BBC1 which achieved the highest rating in the series and Britain's Favourite View for ITV1.

Dealing with Dickinson David presented a peak time series for BBC1 called Dealing with Dickinson. During this series he risked his professional reputation and his own money to train six complete strangers in the world of antiques who all had to try and rise to the challenge of 'Dealing with Dickinson'. David's best known national catchphrases are 'cheap as chips,' 'a bit of a duffer' and 'a real Bobby Dazzler!' but he has many more in his repertoire, which include some of his most frequently used pieces of advice such as 'always look for quality pieces' and 'look for perfection, especially in porcelain.'

David is the author of two books The Antiques Buyer and Dickinson's Bargain Hunters Handbook and he has released a DVD entitled David Dickinson Cheap as Chips. He writes a weekly column in the magazine Real People and he has also published his best selling autobiography, aptly entitled The Duke.

Clients often ask about purchasing books for giveaways and delegate packs. Below you’ll find a selection of products by David Dickinson. Click the images to view on Amazon's website. For bulk orders, please speak with your Booking Agent.

How to book David Dickinson for your event