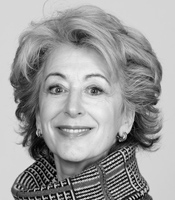 Maureen Lipman was born in Hull and trained at the London Academy of Music and Dramatic Art and learned her trade in Laurence Olivier's Company at the Old Vic from 1970. On television, she starred in thesit-com Agony, Agony Again and All at No 20 and the series About Face and Ladies of Letters. She is well-known for playing Joyce Grenfell in the biographical show Re: Joyce!, which she co-wrote, and for Beattie a series of award-winning television commercials for British Telecom.

She appeared in the films Up The Junction, Gumshoe and Educating Rita and played the mother in Polanski's award-winning film The Pianist. She was The Wire in the 2006 series of Doctor Who, The landlady of The Rover's Return in Coronation Street, the mother in He Kills Coppers and a patientin Holby City.

She has appeared many times in the West End including Wonderful Town, the National Theatre's production of Oklahoma!, Peggy for You, Lost in Yonkers, The Sisters Rosensweig, as Florence Foster Jenkins in the Olivier Award nominated show Glorious!, Thoroughly Modern Millie and as Madame Armfeldt in Trevor Nunn's theatre production of A Little Night Music.

Maureen presented two television series on the subject of Art Deco and Style, wrote a monthly column for Good Housekeeping magazine for over ten years and a weekly column in The Guardian and ten autobiographical books, the latest being I Must Collect Myself.

Having finished filming Metamorphosis by Kafka - playing the mother again, only this time of a beetle, she starred in Priestley's When We Are Married at the Garrick Theatre. In 2012 Maureen directed herself and others in Neil Simon's Barefoot in the Park and starred in Old Money at Hampstead Theatre.

She is a frequent guest on chat shows and political and literary forums.

She was married to the late screen writer Jack Rosenthal for 31 years and appeared in several of his award winning television films - The Evacuees, The Knowledge and Eskimo Days.Their children, Amy and Adam, are both writers.

Clients often ask about purchasing books for giveaways and delegate packs. Below you’ll find a selection of products by Dame Maureen Lipman. Click the images to view on Amazon's website. For bulk orders, please speak with your Booking Agent.

How to book Dame Maureen Lipman for your event