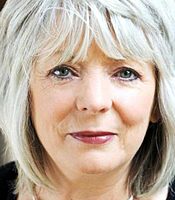 Alison Steadman has established a career that spans over film, television, theatre and radio. As the star of Mike Leigh's plays and films, one of her best known roles was as the lead actress in Abigail's Party.

Many people recognise Alison in the role of Michael Gambon's mother in The Singing Detective or from the enormously popular BBC adaptation of Jane Austen's Pride and Prejudice, in which she played Mrs Bennett alongside Colin Firth, Julia Sawalha, Jennifer Ehle and Emilia Fox, to name but a few.

Starring in the much-loved series Gavin and Stacey as eccentric Essex mum, Pam, brought Alison to the attention of an even wider audience and made her into a national treasure. Alison has been awarded an OBE for services to British drama.

Over the years Alison came to be known for her quirky roles and dazzling stage work in The Rise and Fall of Little Voice, for which she won an Olivier Award, The Memory of Water, Joe Orton's Entertaining Mr. Sloane and The Woman Who Cooked Her Husband. Her film appearances include The Life and Death of Peter Sellers, A Private Function, Coming Through, Clockwise, The Adventures of Baron Munchausen, and Shirley Valentine, not to mention her former-husband, Mike Leigh's critically acclaimed pictures Life Is Sweet, for which she won the National Society of Film Critics Award, Secrets & Lies, and Topsy-Turvy.

Alison Steadman's full and varied career makes her an excellent after dinner speaker and with her versatility and experience on stage and screen she would be a fantastic host to any awards ceremony.

How to book Alison Steadman OBE for your event