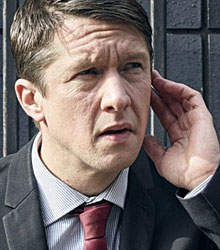 The irate, fictitious British news reporter Jonathan Pie first appeared in September 2015, in a series of video clips, widely disseminated on social media, in which he closes off a segment as though a real TV reporter, handing back to the studio, before ranting animatedly to cameraman 'Tim' about the state of UK and US politics, revealing with a flourish what he really thinks about the current situation.

Jonathan Pie's monologues were originally co-written with comedian and journalist Andrew Doyle. His first spoof news report was released shortly after the election of Jeremy Corbyn as leader of the UK Labour Party. He was soon approached by several media companies, including RT UK, for whom he worked over several months before leaving in July 2016, ahead of his appearance at the Edinburgh Festival Fringe that August.

However, it was a "news report" immediately following the November 2016 US election, won by the Republican candidate Donald Trump, that Jonathan Pie achieved international coverage. It trended on YouTube, with Pie's customary ranting-and-raving style, both well-informed and aggressive, given free rein. The video had received more than four million views by early 2020, more than ten times any of his preceding videos.

In 2016, he embarked upon his debut stand-up tour, Jonathan Pie Live, and these were followed by 2018's Back To The Studio and 2019's The Fake News Tour. In 2018, BBC Three released both Jonathan Pie: Back To The Studio, a live recording of the Hammersmith Apollo leg of this second tour, and Jonathan Pie's American Pie, which focused specifically on sociopolitical issues during Trump's administration.

In 2022, Pie started showing up in The New York Times' opinion page: firstly comparing Boris Johnson with Donald Trump for an American audience as serial liars full of entitlement who had never met an ordinary person, besides – maybe – their chauffeur, selling out their allegedly beloved country to the highest bidder. And then in the context of the Russian invasion of Ukraine, he made other videos criticising Tory politicians for accepting donations from Russian oligarchs.

In both his videos and live tours, Jonathan Pie vents his spleen at both sides of the political divide, skewering hypocrisy on the far-left and the far-right and scrutinising the state of contemporary debate, leaving no prisoners behind.

As his frustrations boil over and he explodes before the camera, he speaks for a whole nation — indeed, a whole planet — desperate for hope and change in a world that seems increasingly fractious, angry, and disordered.

A popular and unique feature for corporate bookings, Tom Walker creates bespoke tailored material specifically for the event weaving in Jonathan Pie ‘rants' with information about the event and/or company that has booked him.

Tom, as Jonathan Pie, is also an excellent corporate awards host and after dinner comedian.

How to book Jonathan Pie for your event