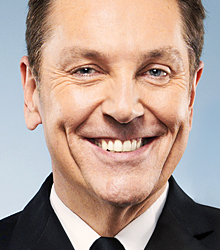 In a career spanning more than three decades Brian Conley has appeared in award-winning West End musicals and television sit-coms, presented his own chat shows, recorded three albums and completed numerous sell-out tours of the UK.

Born and raised in West London, Brian studied Performing Arts at The Barbara Speake Stage School and at 16 started working as a cabaret performer. After appearances on Five Alive and Live from the Palladium Brian hosted two series of Brian Conley - This Way Up and four series of The Brian Conley Show, both for ITV.

Brian Conley's television roles include two series of Time after Time (British Comedy Award for Best ITV Sitcom) and Doug Dynamo Digby in ITV's cult hit The Grimleys, starring opposite Amanda Holden and Noddy Holder with other roles in Last Of The Summer Wine, The Cruise and The Life And Times Of Vivienne Vyle opposite Jennifer Saunders.

Brian presented The National Lottery Show Live; hosted two series of Let Me Entertain You for the BBC, starred in his own An Audience With... and has hosted and appeared in eight Royal Variety Performances.

In the West End, Brian has starred as the lead character in Cameron Mackintosh's Barnum, Caractacus Potts in Chitty Chitty Bang! Bang! (London Palladium) and originated the role of Al Jolson in the Olivier Award winning Jolson (Victoria Palace Theatre). He appeared in the hit comedy Elton John's Glasses at the Queen's Theatre, Shaftesbury Avenue and starred as Bill Snibson in Me and My Girl for a year at the Adelphi Theatre. He also starred as Harold Hill in The Music Man, in a sell out run at the Chichester Festival Theatre for which he won Best Performance in a Musical at the TMA Awards.

He has recorded three albums: Stage to Stage with the London Philharmonic Orchestra, Let The Good Times Roll and Brian Conley Sings.

Brian Conley has starred in the movie Circus with John Hannah and Eddie Izzard; Unconditional Love alongside Kathy Bates; Dream with Sinead Cusack; Arthur's Dyke with Pauline Quirk; I Am Bob with Sir Bob Geldof and joined Sean Bean and Christian Bale in the cult film Equilibrium.

Brian has won numerous awards in his career including The National Television Award for Most Popular Comedy Performer, Show Business Personality of the Year and the Manchester Evening News Theatre Awards for Most Popular Performer and Best Performance in a Musical. Another highlight in Brian's career was when he was presented with the famous Big Red Book when featured on This is Your Life.

He has starred as Edna Turnblad in the hit West End musical Hairspray both in London and on tour and did a nationwide tour of Brother Love, celebrating the music of Neil Diamond, directed and choreographed by Craig Revel Horwood. Not to mention starring as Fagin in the nationwide tour of Cameron Mackintosh's production of Oliver and he led the cast of Robinson Crusoe & the Caribbean Pirates at the Birmingham Hippodrome. In 2021 Brian joined the cast of Eastenders as Terry Cant.

Brian Conley lives in Buckinghamshire with his wife Anne-Marie and their two daughters, plus Maisy and Ruby the dogs and Mr Buttercup the bunny.

If you’re looking for a skilled, experienced and fearless event host or entertainer for your event, Brian Conley is the best in the business. He can present everything from performing after dinner stand up and West end show tunes, to hosting live games with the audience and even emceeing your whole evening!

Please pass on my thanks to Brian Conley for another superb performance the compliments have been flooding in - he was a pleasure to work with in every aspect. Brilliant!

Brian Conley was great! Really good to work with and he went down really well. He has so much energy... Fantastic!

It was fantastic and we have had really, really excellent feedback on Brian. They thought he was amazing, stole the show and just all round fab! So glad we booked him and he really was fabulous!

Brian Conley went down a storm and so far he has scored the highest marks on our event feedback with many guests saying he was the highlight of their evening.

Clients often ask about purchasing books for giveaways and delegate packs. Below you’ll find a selection of products by Brian Conley. Click the images to view on Amazon's website. For bulk orders, please speak with your Booking Agent.

How to book Brian Conley for your event

One of Britain's most popular entertainers and TV presenters

One of Britain's most popular entertainers and TV presenters