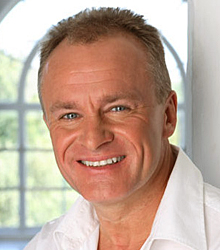 Bobby Davro made his television debut in 1981; his major breakthrough came with an appearance in "Live At Her Majesty’s" in 1983. This led to his own Saturday night series Davro, Bobby Davro On The Box, Bobbys Sketch Pad and TV Weekly which immediately topped the ratings for six consecutive years. In 1991 bobby moved to the BBC and made three series, Public Enemy Number One, Rock With Laughter and Run The Risk.

In 1997 Bobby hosted for Yorkshire Television's Winner Takes All for 65 programmes. Bobby has been touring with Swingin' a tribute to the songs and music of Frank Sinatra featuring bobby's 15-piece orchestra and international recording star Kenny Lynch in 2003 Bobby was involved in a brand new exciting show for Channel 4, called The Games in which Bobby had to compete in several Olympic style events. Bobby more recently appeared in the cast of Eastenders as loveable cockney rogue Vinnie Monks.

In December 2009 he topped the bill in the pantomime Cinderella at Milton Keynes alongside veteran Hollywood star Mickey Rooney he also performed in the ITV series of Dancing On Ice 2010 and now regards skating as one of his added talents.

I wanted to express my heartfelt thanks to Bobby Davro for a fantastic show on Saturday. Please let him know how much he is appreciated. It's not easy when the expectation level is very high, but he was brilliant. Such a nice man as well, he made my party, everyone loved it, I can't thank you enough. So many, many thanks for a great show and thank you for making all the arrangements

A huge thank you for last night. Bobby was brilliant and went down a storm.

Clients often ask about purchasing books for giveaways and delegate packs. Below you’ll find a selection of products by Bobby Davro. Click the images to view on Amazon's website. For bulk orders, please speak with your Booking Agent.

How to book Bobby Davro for your event