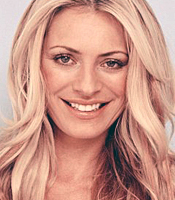 Tess Daly gained nine O-Levels at New Mills Secondary School in Derbyshire before being spotted by Models One. She went on to achieve great success, gracing the cover of numerous magazines. This brought fantastic travelling opportunities to locations such as Madrid, Tokyo, Paris, Barcelona and New York.

In 1990 she appeared in two Duran Duran videos for the songs “Serious” and “Violence of Summer (Love's Taking Over)”, both from the album Liberty. She also appeared in the video for The Beloved's 1993 song “Sweet Harmony”.

After working as a model, Tess Daly's first television appearance was in 2000, when she hosted the 'Find Me a Model' competition on Channel 4's The Big Breakfast. Since then, she has presented shows including Singled Out, Smash Hits TV, SMTV Live, Back To Reality, the first series of Make Me a Supermodel (with Dave Berry) and, most famously, BBC1's hit prime time entertainment show Strictly Come Dancing, which she has co-hosted with Bruce Forsyth in all nine series to date.

Tess has also hosted This Time Tomorrow, the National Lottery show for BBC1. And in 2008 she presented Children in Need with Terry Wogan and Fearne Cotton. She won the special version of Strictly Come Dancing against Wogan, where she was partnered with Anton du Beke. Tess then went on to co-host the Royal Variety Performance in December 2008.

Returning to her modelling days, she became the popular face of lingerie company La Senza in the UK and appeared in their Steal the Show Christmas 2009 campaign.

Tess Daly is married to fellow television presenter, and former male model, Vernon Kay. They live with their two children in Buckinghamshire.

How to book Tess Daly for your event