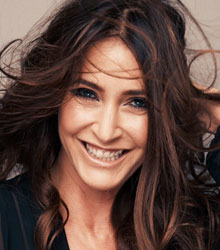 Lisa Snowdon was spotted by a model scout at the age of 19 and quickly became one of the UK’s top fashion models. She has appeared in major fashion magazines such as Vogue, Marie Claire and Cosmopolitan, as well as the occasional men's magazine, including GQ, Esquire and FHM. The latter seemed to be a huge fan of Lisa, as it featured her in 2 of its calendars, as well as chose Lisa to grace the cover of the 1999 edition of "The Girls of FHM".

However, even with Lisa's magazine spreads and her work with big-time photographers like David Bailey, Nick Knight, Kim Knott, and Andre Rau, Lisa is best known for her commercial work.

Her first move into TV presenting was for MTV’s MTV Select, and in 2006 was announced as the head judge and host of Sky Living’s Britain’s Next Top Model, which she hosted until 2009. In between series 4 of BNTM in 2008 Lisa was announced as the co-host of Capital London’s Breakfast show, initially with Jonny Vaughan and later with Dave Berry. She co-hosted the award winning show for 7 and a half years until 2015, with over 1 million listeners which became London’s number one breakfast show.

Lisa continues her presenting career by regularly appearing on This Morning discussing Style & Beauty. She also is consistently posting on her blog ‘You Glow Girl’ which includes post about Beauty & Well Being.

How to book Lisa Snowdon for your event