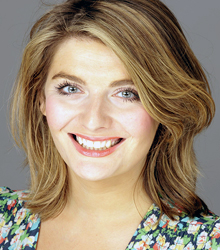 Bryony Gordon is one of The Telegraph’s best loved journalists and features writers. In the two decades that she’s worked for the newspaper, Bryony has interviewed such eminent figures as Lord Heseltine, Ricky Gervais and Bryan Ferry.

Her much loved column in the Sunday Telegraph's Stella magazine, How the Other Half Lives, has been described as a staple for any Sunday morning reader, where she investigates and bemoans the absurdities, comic episodes and craziness of modern life.

Bryony is also author of the bestselling The Wrong Knickers plus The Sunday Times Number One bestsellers You Got This and Mad Girl, which were both nominated for British Book Awards. She is the presenter of the Mad World podcast and in 2016 she founded Mental Health Mates, a global peer support network which encourages people with mental health issues to connect and get out of the house. In 2017, she won the MIND Making A Difference Award for her work in changing the perception of mental health in the media.

Bryony Gordon has OCD — Obsessive Compulsive Disorder — and over the years has also suffered from depression, bulimia and drug dependency. Most of this she did completely alone, just like everyone else who suffers from mental illness. Back in January 2016, Bryony was in a terrible funk because she had just spent several months writing a memoir of her mental health, and who knew that writing about mental illness might make you… well, mentally ill?

So there she was, out in the park trying to run away her OCD, listening to a Jarvis Cocker documentary about the author Carson McCullers, whose relatively short life was dogged by depression and alcoholism. There was some archive audio of her saying: 'everyone is part of a We except me'. Her words stopped Bryony in her tracks. "No!" I thought. "No, you were wrong! You belonged to a 'We', but you just didn't know it!" So she went home and decided to find that 'We'. Bryony posted on Twitter, suggesting a regular meet-up for people with mental health issues, where they could walk and talk without fear of judgement.

She suggested a date and a place: Valentine's Day, at the Lido Café in Hyde Park. She wondered if she gone properly mad as she left home that cold, wet Sunday morning. But then 20 people turned up, and Mental Health Mates has continued to grow ever since.

Bryony began her journalistic career as an intern for the Daily Express and went on to write for the Daily Mirror and the Daily Telegraph, where she has published a weekly column since 2006. She then published her first book, a memoir titled The Wrong Knickers, in 2014, which became a Sunday Times bestseller remaining in the charts for 6 weeks.

It was followed by Mad Girl, in which Bryony discusses the challenges of obsessive-compulsive disorder, bulimia, alopecia and addiction from a personal perspective. It was published to critical acclaim, intense media coverage and then was selected for the Richard and Judy Spring Book Club 2017, where it also became a Sunday Times Bestseller, staying on the paperback non-fiction chart for over 2 months.

In her candid and highly praised keynote speeches, Bryony Gordon talks about her own personal struggles with addiction. She not only raises awareness of addiction with searing honesty, she also makes people think about the causes and consequences of this life-stopping condition.

Uncompromising in her truthfulness and openness, Bryony challenges the stigma that surrounds addiction and demonstrates a determination that whatever life throws at you it is to be lived and cherished.

The abundance of integrity, dignity and humanity Bryony Gordon brings to her presentations invites the audience to relate to her own experiences and, in so doing, will hopefully help others to open up about their own difficulties and be aware that everyone has their own demons to battle.

Bryony was absolutely incredible. She spoke with such candour and struck exactly the right note which was no mean feat considering that we had such a wide-ranging audience.We were moved, entertained and inspired by Bryony's words in equal measure and I really, really hope that we can welcome her back to Thomas's again soon.

Clients often ask about purchasing books for giveaways and delegate packs. Below you’ll find a selection of products by Bryony Gordon. Click the images to view on Amazon's website. For bulk orders, please speak with your Booking Agent.

How to book Bryony Gordon for your event