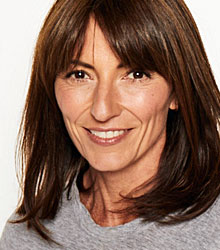 Davina McCall is one of the best-known faces on UK television. With a career spanning more than twenty years, she has hosted numerous high profile shows and is probably best known as host of iconic programmes such as Big Brother and BAFTA award-winning Long Lost Family.

Her warmth, humour and charm have endeared Davina to millions of viewers and made her the first lady of reality television. Part of her upbeat and sunny disposition — one of her greatest assets as a TV presenter — stems from overcoming a fractured childhood and turbulent teenage years.

Behind this amazing and successful woman is an incredible story of triumph over personal mountains that, for years, were impossible to climb and forced Davina to grow up fast. However, the adult world did not sit comfortably with her.

The price of this was a retreat into drugs and alcohol, as well as a string of difficult relationships that threatened to ruin her. Facing crisis, Davina took control and bounced back in style, facing her demons and moving on to achieve incredible nationwide success that made her the envy and role model of many a would-be TV presenter.

Born to a French mother and an English father, Davina experimented with various career opportunities as a young adult. At 19, she wanted to become a solo artist and briefly commenced classical vocal coaching, before working as a model and then a brief stint as a Moulin Rouge-style cabaret dancer in Paris.

On her return to London, Davina worked on the nightclub scene as a hostess and, in 1991, she appeared as a dancer in Kylie Minogue’s video for her single Word Is Out, wearing a striped sweater and beret in a nod to her French ancestry.

Family friend Eric Clapton helped turn things around for Davina and got her a media break in 1992 when she landed her own show on MTV, presenting the MTV Europe show Most Wanted. Other roles followed before she became the anchor presenter on Don't Try This at Home from 1998-2001 and cult Channel 4 dating show Streetmate, also between 1998-2001.

More recently, Davina has hosted Channel 4's The Jump and ITV's Life At The Extreme, having previously hosted shows such as The Million Pound Drop and Sky1's Got To Dance. She has also been the face (and hair!) for the L'Oreal brands Garnier and Nutrisse for over a decade and is, without doubt, the UK's Number 1 fitness DVD franchise, having produced numerous top selling DVDs including her latest, 5 Week Fit.

Since 2010 she has had her own line of fitness equipment with Argos and launched a healthy cooking range with Lakeland.

In documentary television, Davina McCall has fronted Let's Talk Sex about sex education and how it's taught in the United Kingdom (which, at the time, had one of Europe’s highest levels of teenage pregnancy). She also published a companion book to the series. Davina has also appeared in a video for schools called Watch Over Me, talking about her drug addiction and peer pressure.

Davina McCall is an active supporter and campaigner for the charities Focus 12, Action Medical Research and Stand Up To Cancer. She also fervently supports Comic and Sport Relief, for whom she undertook the challenge of a lifetime in 2014 when she rode, swam & ran 500miles in one week from Edinburgh to London & raised £2.7 million for the charity.

Clients often ask about purchasing books for giveaways and delegate packs. Below you’ll find a selection of products by Davina McCall. Click the images to view on Amazon's website. For bulk orders, please speak with your Booking Agent.

How to book Davina McCall for your event