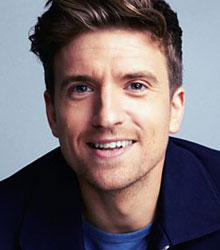 Greg James is the host of Radio 1's drivetime show. His first ever Radio 1 show was broadcast in 2007, the day after he graduated.

In 2014 Greg won a Gold for ‘Best Entertainment Show' at the prestigious Radio Academy Awards, a truly career defining moment.

A huge cricket fan, Greg James hosts the radio entertainment show ‘Not Just Cricket' alongside Jimmy Anderson and Graeme Swann on Radio Five Live which was nominated for a Radio Academy Award.

Greg travelled to Zambezi with Comic Relief in 2012, traversing 100km of deadly waters to raise money and awareness for the charity. He also competed in Seb Coe's team for Clash of the Titans/Sports Relief in 2014.

Greg regularly DJ's at student unions across the country.

How to book Greg James for your event