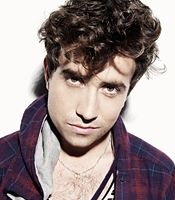 As well as hosting various shows for BBC Radio 1, Nick Grimshaw is notable for his work on Channel 4, E4, BBC One, BBC Two and Channel 4 youth strand T4.

As well as his broadcasting duties, Nick is an Ambassador for the men’s fashion industry in the UK for London Collections Mens. As a lover of art he is also an ambassador for the Royal Academy of Arts and hosts regular Facebook Q&A’s for The Tate Modern.

His presenting skills are also regularly called upon, with hosting duties for the Elle Style Awards and the BRITS nomination awards.

How to book Nick Grimshaw for your event